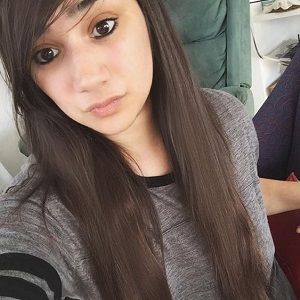 What is the relationship of Kimmi Smiles?

The 26-year-old Australian YouTuber, Kimmi is an unmarried woman. Previously, she was in a beautiful relationship with YouTuber Dave Days.

The couple started dating in 2010 and continued their relationship for a couple of years. Furthermore, they split up after dating for almost two years in 2012.

Since there broke up, Kimmi has been spotted with a couple of YouTube stars in her videos. Although, she has not confirmed her boyfriend.

As per the reports, Kimmi is enjoying her single life and living elegantly.

Who is Kimmi Smiles?

Kimmi Smiles is an Australian YouTuber. She has been posting various parody videos of famous singers such as Taylor Swift, Harry Styles, Miley Cyrus, Justin Bieber, and a few others.

Kimmi was born on November 5, 1991, in Melbourne, Australia. Talking about her nationality, she is Australian and her ethnicity is unknown.

Kimmi began her career as a YouTuber on July 11, 2009, by creating her channel. Since then, she has been posting several videos on YouTube.

Back on August 12, 2009, she posted her first video named “Lame Vlog is Pointless and Lame”. She has been posting various parody videos of famous singers such as Taylor Swift, Harry Styles, Miley Cyrus, and a few others.

Besides this, Kimmi also regularly posts videos about zombies which also include “Top 10 Things You Should NOT Do in a ZOMBIE APOCALYPSE.” In addition, she has also collaborated with Alfie Deyes.

Is Kimmi Smiles involved in any rumors and controversies?

Moreover, she has never faced any controversy in her career to date. It seems she has total focus on her work rather than being stuck in any controversy.

Currently, she has almost 70k followers on Instagram and more than 28k followers on Twitter. Additionally, she also runs a YouTube channel in which she has over 424k subscribers.