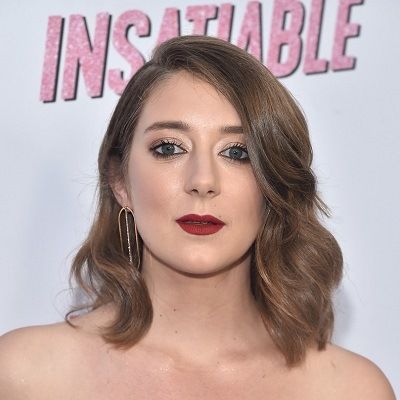 In “Insatiable”, Kimmy takes the persona of Nonnie. Nonnie is in love with Patty. On-screen, Kimmy starts questioning her own biological preferences.

To quote “Nonnie, gets to see her really go through this journey of her sexuality and wondering if she’s actually gay or if she really just likes Patty”.

Maybe Kimmy is more mature in her relationship than the character she plays.

Who is Kimmy Shields?

Kimmy Shields is an American actress and TV Star. Kimmy rose to popularity with her roles in TV Series like Insatiable, Big Little Lies, The Last Ship, and Runaways to name some of her notable works.

She is on the headlines for landing the role of Sergeant Romano on the sci-fi thriller Ad Astra which will be released in 2019.

Kimmy Shields was born on  September 15, 1993, in Los Angeles, the United States. She is a Virgo.

Her father is Perry  Shields, he is an acting teacher in Los Angels. She has a sibling namely, Craig Shields.

She completed her acting class from American Musical and Dramatic Academy.

Kimmy used to work as a counter girl at Pedone’s Pizza. She started her acting in Hogoz as Ally. She appeared as a camera assistant who records Ruth during her audition in the series ‘GLOW‘.

Kimmy appeared in some movies like Charly Says, Sort of Friends, Sing For Your Sour. Her upcoming movie Ad Astra as Sergeant Romano in 2019. Recently, she appeared in the Netflix Original Series “Insatiable” as Nonnie Thompson.

Shield has a big collection of books and novels because she loves reading.

She has an estimated net worth of around $255 thousand and her earning sources are acting.