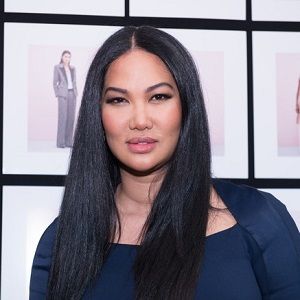 anything a guy can do a girl can do better...except being stupid.

You can do anything you put your mind to, and you can do it in stilettos.

Life is a series of adjustments

You can make changes along the way, but if you dodn't start moving forward you'll never get anywhere!

On talking about her relationship, she met Russell Simmons during New York City’s Fashion Week in November 1992. Simmons’s brother, rapper and Pentecostal minister, Joseph “Reverend Run” Simmons” of Run-DMC married the couple on the Caribbean island of St. Bart’s on December 20, 1998.
The couple has been blessed with two daughters, Ming Lee Simmons (born January 21, 2000) and Aoki Lee Simmons (born August 16, 2002). However, The couple got separated in March 2006. She filed for divorce from Russell Simmons in March 2008 which finalized in January 2009.

Moreover, Simmons dated actor and model Djimon Hounsou in March 2007 and participated in a traditional Benin commitment ceremony in the summer of 2008 which lead to the birth of their son Kenzo Lee Hounsou in May 2009. However, the couple who were never legally married announced their separation in November 2012.

Who is Kimora Lee Simmons?

Kimora Lee Simmons is an actress, fashion model, fashion designer, and producer belonging to America. She is recognized for her work in For Love or Money (1993), Rebound (2005), and Waist Deep (2006).

Kimora Lee Simmons was born in St. Louis, Missouri, the USA as Kimora Lee Perkins on May 4, 1975. Her parents are Vernon Whitlock Jr and Joanne Kyoko Perkins.

Her mother is a Social Security Administrator while her father served as an Equal Employment Opportunity Commission investigator, a Federal Marshal, a bail bondsman, and later on, promoted to a barber in St. Louis. Moreover, while Kimora was in grade school, her father was sentenced to prison for the distribution of narcotics. Another,  her parents got separated after the returning of her father from jail.

Besides, she had an exclusive contract modeling for Coco Chanel at the age of thirteen.

On talking about her educational background, her mother sent her to a modeling class at the age of 11. Later on, she attended  Lutheran North High School located in St. Louis, Missouri and graduated from there.

In discussing her career, Chanel provided Perkins an exclusive modeling contract after her 14th birthday. She then headed to provide service under the tutelage of Chanel designer Karl Lagerfeld. Furthermore, when she closed Lagerfeld’s haute couture show, she was then able to receive an attention in the fashion world in 1989.

However, Perkins fashioned for designers including Valentino, Fendi, Yves Saint Laurent, and Emanuel Ungaro. Also, she had appeared on the cover of the Indonesian, German,  Malaysian, and Singaporean editions of Harper’s Bazaar.

In addition, Simmons relaunched her KLS label in June 2015 as a high-end line, opening its first boutique in Beverly Hills.

Additionally, she acted in television and films including Brown Sugar, Beauty Shop, and Waist Deep with the small roles. Also, she performed in music videos song entitled “Tapout” for Usher, Ginuwine, and Rich in the year 2013. Another, she appeared in Sony Television’s syndicated talk show Life & Style as a co-host.

In addition to acting, she also published a self-help book, Fabulosity: What It Is and How to Get It in February 2006 in association with HarperEntertainment.

In discussing her achievements and awards, she may not have got any wards yet. She would get lots of awards in the coming days due to her successful career.

Kimora Lee Simmons: Salary and the Net worth

An actress earns a huge amount of salary but has not yet disclosed to the media. She has an estimated net worth of $50 million.

Police arrested Simmons and charged for eluding police, reckless driving with a broken brake light, and marijuana possession after a two-mile chase which started near the Saddle River Police Station and ended outside her estate in Saddle River, New Jersey.

She has a tall and attractive body with the height of 6 feet. Her body statistic and weight are currently unknown. She possesses a dark black hair color and black eyes.