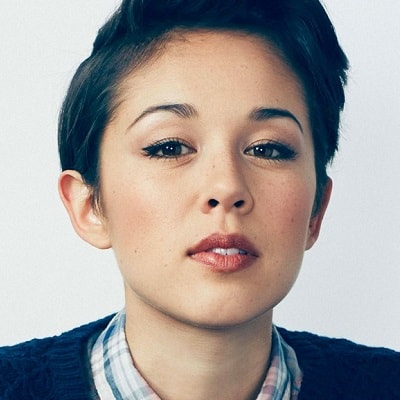 I'm kind of feeling like I don't mind being open with the random details of my life, like I'm at a coffee shop or my toe hurts or something, but obviously other more personal areas of life where I will just never really go there.

I started teaching myself guitar because I loved singing so much. Then one day kind of out of the blue I found I was writing a song. It just happened organically.

My two sisters and I sang all the time. Whenever we cleaned the kitchen, we sang in three-part harmony.

Kina Grannis is a married woman. She has been married to Jesse Epstein, a musical collaborator on August 31, 2013. It was a small and intimate wedding ceremony in Los Angeles, California attended by close friends and family.

She has featured her wedding video in her music video ‘My Dear’ to mark their first wedding anniversary.

The pair were high school sweethearts and had met in Capistrano Valley High School. After years of dating, Epstein proposed to her on Valentine’s Day of 2013.

The couple is currently living together without any sign of divorce. Also, they have not shared any children to date.

Who is Kina Grannis?

Kina Grannis is a famous Japanese-American singer-songwriter, YouTuber, and guitarist. She won the 2008 Doritos Crash the Super Bowl contest and earned a recording contract with Interscope Records.

She was born on August 4, 1985, in Mission Viejo, California, United States. Her full name is Kina Kasuya Grannis.

She has two sisters: Misa and Emi Grannis.

She was offered to produce an album in Thornton School of Music’s music and music industry departments when she was a student at the University of Southern California.

In 2006, Kina Grannis released two albums which were recorded and self-released which were titled ‘One More in the Attic’ and ‘In Memory of the Singing Bridge’.

On November 14, 2007, she created her own YouTube channel and her first video is Message from Your Heart and this song entered the Doritos Crash the Super Bowl contest.

She worked with the label to release her album but she left the label to become an independent artist in January 2009.

Kina Grannis has made her first world tour was in 2011, the World in Front of Me Tour and then by her tour In Your Arms Tour (2011-2012). Moreover, she joined a site created by Jack Conte in April 2014 to provide artists a living via direct support called The Patreon.

Similarly, she created a record label in Aril 2017 with the help of her patrons and supporters and named the label KG Records. She recorded, produced, and released her own songs through KG Records.

She won the Doritos Crash the Super Bowl contest and was offered a contract with Interscope Records.

She headed to Jakarta, Indonesia on a tour on September 14, 2015, but due to complications with her work visa, she was detained for 100 days in Indonesia.

Also, she was told not to make YouTube videos and not talk about her struggles but she wrote two of her songs California and For Now.

Kina Grannis has a height of 5 ft. 4 inches and weighs 54 kg. She has dark brown eyes and black hair. Her distinctive features are short hair and arc-shaped eyebrows.

To know more about Dreka Gates, John Bradley, and Angelica Ross, please click on the link.