Kirk Herbstreit is an analyst on ESPN and a diehard fan of Reds and CBJ. He is also an actor. Kirk is happily married to Allison Butler with four children, all sons. 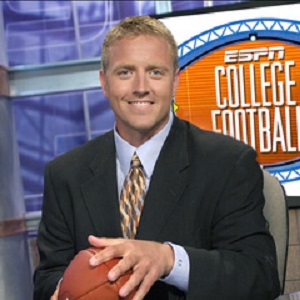 Being able to go to a place like that and know there's a chance to play every day, that's pretty attractive

“Who's going to beat Boise State?”

Kirk Herbstreit is a married man in 1998. His wife’s name is Allison Butler. Both of them got married in 1998. They are the perfect couple and their relationship is going very well.

They are happily married and have four sons Jake and Tye are identical twins and are in grade while the third son Zak is in 6thgrade and the youngest son Chase is in 2nd grade.

There are several reports of Kirk having another affair with Erin Andrews, but he and his wife have never publicly addressed that issue.

People suspect that there are some problems between them. For now, Kirk and his wife Allison are doing well although, the news is filled with reports of his affairs with others.

Kirk’s job keeps him out of the house, but he always tries to find the time and spends it with his children and wife.

Who is Kirk Herbstreit?

Kirk Herbstreit is a well-known American analyst and actor. He is a former college football game color commentator for both ABC and ESPN. He is also an NCAA Football commentator for EA Sports.

Kirk Herbstreit was born on 19 August 1969, in Centerville, Ohio, United States. His nationality is American and his ethnicity is North American.

He grew up in a family where college football was appreciated. He is the son of a sports player Jim Herbstreit. His mother Evelyn is a homemaker. Kirk was impressed by his father’s achievements in college football, From his early childhood.

From the school days, he was somehow involved in sports activities.

After waiting for four long years, he finally got his chance to lead the team as a senior in 1992. In the same year, he got much recognition and fame as he was named co-captain and also voted as the team of MVP.

Kirk Herbstreit career started with Chris Fowler, Desmond Howard, and Lee Corso. They worked together on ESPN College Gameday. They would discuss college football games and analyze the highlights of players.

He was successful in becoming one of the ABC Sports college football analysts. He also worked as a columnist as he has a great interest in the writing section.

He is responsible for writing Inside the Game published in 1997. He has experience in different areas. He once worked for FM Radio Station. Along with Keyshawn Johnson and Michael Wilbon, he can be seen as one of the panelists for the series named who’s Now.

Currently, he is an analyst for ESPN’s college game day. This is a television program which reports on college football. He also acts as a commentator in EA sport’s NCAA football.

Talking about achievements, he was able to win the nomination for the 1997 Sports Emmy. This category of award was presented on the title of Top Studio Analyst.

Kirk Herbstreit has a net worth of $4 Million and his salary is $2 Million annually.

Once there was a rumor that he was dating his colleagues but all of them proved to be fake as nothing has been confirmed by him or anyone else.

And also, the news is filled with reports of his affair with Tracy and there were rumors of the couple getting separated but there are no indications of divorce coming this way.

As he is a great personality, he can handle both his personal and professional life, there are no such controversies related to him, unlike other celebrities.


Kirk Herbstreit has a height of 6 feet 3 inches. He has golden-brown hair and blue eyes.