Who is the father of Kirsten O' Brien kids?

Kirsten O’ Brien is married to Mark Drake and leads happy conjugal life. The couple is blessed with three children, a firstborn son named Fox Michael Drake on 15 December 2011 and twins. The twins, son, and daughter were born in September 2017. 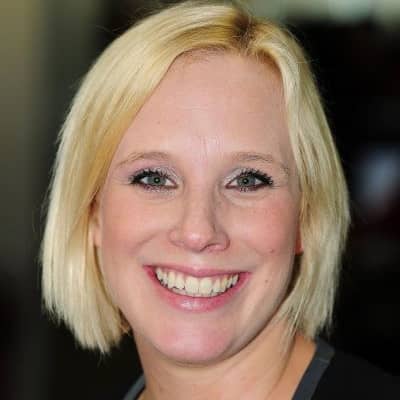 Who is Kirsten O’ Brien?

Kirsten O’ Brien is a communication professional, former English television presenter, and actress. Kirsten is renowned as the co-presenter of the CBBC art program SMart from 1999 to 2009.

Additionally, she rose to a new height after CBeebies pre-school art spin-off program SMarteenies in 2002. She is an Inside Out NE reporter and presenter for Andrew Peach’s Breakfast show on BBC Radio Berkshire.

Regarding education, Kirsten graduated in media and communications at the University of Central England in Birmingham in 1993. Meanwhile, she has not disclosed the identity of her parents, and siblings to the media yet.

To begin Kirsten’s career, she first got her broadcast experience on the university’s student radio station in 1995 at Tyne Tees Television. Next, she landed her presenting debut in a children’s science program.

Well, she interacted with the team of CBBC, BBC’s children’s programming since 1996 and has had amazing three-and-a-half years. Meanwhile, she met and formed partnerships with puppet Otis the Aardvark alongside Dave Chapman.

Though she left the CBBC on-air presentation team in 1999, she is a regular presenter on children’s TV and radio. Kirsten as a part of the team has co-hosted SMart and its spin-offs SMart on the Road and SMarteenies. In addition, she was appointed as the presenter of BBC 7’s Little Toe Radio Show.

Surprisingly, Kirsten is a theatre artist too who in 2004 portrayed Peter Pan in pantomime. Eventually, she took part in a lumberjack competition for the BBC series Bring It On the same year.

During the Edinburgh Fringe in August 2006, she performed the sketch show Lesley’s Lunch Hour – Not During Lunch. Also, she presented And Not Quite An Hour along with double act partner Ruth Bratt. A year later, she took her comedy show Kirsten O’Brien – Confessions of a Children’s TV Presenter to Edinburgh.

Kirsten is featured in Television programs like We Need Answers, Total Wipeout, GMTV, The King is Dead, and The One Show. In between, she participated in Let’s Dance for Sport Relief as a reality fundraiser Television show.

Kirsten O’Brien earns a handsome salary as a  SMart frontwoman, which led her to accompass a $2 million net worth as of 2022. Besides, her luxuries, cars, brands, and lifestyle is under review.

Kirsten has spoken about her friend’s suicide back in 2009 on Children’s Tv. Expect for this there are no rumors and controversies relating to the SMart presenter at CBBC.

Kirsten O’Brien has a decent height with blonde hair, blue eyes, and a fair skin complexion. Her shoe size is 4 (US) while she wears a dress of size 8 (US). She has an average body weight whose chest, waist, and hip measurements are unknown.