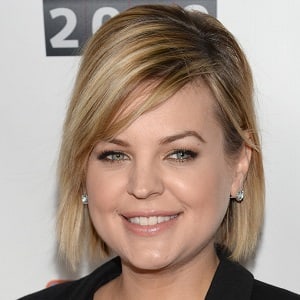 I don't want to be perceived as someone who has it all figured out. I certainly don't feel entitled or like I'm a superstar. I'm still growing, learning, and figuring things out.

Kirsten Storms was in a relationship with former soap actor turned artist and entrepreneur, Ben Hogestyn. From 2004 to 2005, she dated an actor, model, and singer, Josh Henderson. Kristen and Erik-Michael Estrada dated for a year from 2005 to 2006.

Storms was married to actor Brandon Barash on 16 June 2013. The pair has a daughter named Harper Rose Barash from this relationship. They later separated in 2016. At present, Kristen is in a relationship with musician Elias Paul Reidy.

Who is Kirsten Storms?

Kirsten Storms is an American actress. People mostly know her as Zenon Kar in the ‘Zenon’ trilogy. Additionally, she also appeared as Emily in ‘Johnny Tsunami’, and Bonnie Rockwaller in ‘Kim Possible.’

Storms was born in Orlando, Florida as Kirsten Renee Storms on April 8, 1984. She was born to parents Karen Storms and Mike Storms. In addition, she became interested in the world of acting since her childhood years and wanted to be a soap opera actress as a child. She is of American nationality. Furthermore, there are no details available about her ethnic background at present.

Talking about her education, no information is available about Storms’ educational background.

Some other movies and television series that Storms has appeared in are ‘General Hospital’, ‘Winterthorne’, ‘General Hospital: Night Shift’, ‘Kim Possible’, ‘Skater Boys’, ‘Clubhouse’, ‘Kim Possible: So the Drama’, ‘CSI: Miami’, ‘Days of Our Lives’, ‘Zenon: Z3’, ‘That’s So Raven’, ‘7th Heaven’, ‘Johnny Tsunami’, ‘Love Letters’, and ‘Any Day Now’ among others.

Storms has not revealed her current salary. However, she has an estimated net worth of around $ 6 million at present.

There were several rumors which suggested that Storms might be pregnant with her second child. This later turned out to be false. Storms became part of a controversy after she was arrested for a DUI due to her failure at sobriety tests.

Talking about her body measurement, Storms has a height of 5 feet 3 inches (1.6 m). Additionally, she weighs around 57 kg or 125.5 lbs. She has a body measurement of 36-24-35 inches. Furthermore, her natural hair color is dark brown which she has dyed blonde and her eye color is blue.