Kirstie Alley is an American actress and spokesmodel. She is known for Star Trek II: The Wrath of Khan. She has two children.

Kirstie Alley has been married twice in her lifetime. Alley met her first husband who was also her far-cousin in the high school and they dated. They got married in the year 1970.

But their marital life couldn’t work so they decided to split up. They didn’t have any children together. Again in 1983, December 22, she got married to her second husband Parker Stevenson with whom she had two children.

They got divorced in the year 1997 and also shared the custody of their two children. Since then she hasn’t been in any type of relationship to date. 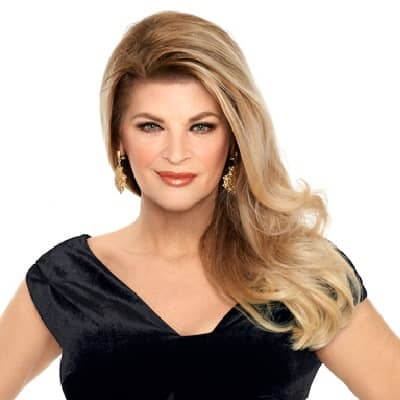 I always feel like there is some dude out there with money that I could fall back on if I needed to.

I don't like psychiatry. I don't believe it works. I believe psychiatrists are neurotic or psychotic, for the most part.

You are not in business to be popular.

Who is Kirstie Alley?

Kirstie Alley is an American actress including a comedian and spokesmodel as well. She stepped into this industry from her debut in the science fiction film ‘Star Trek II: The Wrath of Khan‘ in 1982.

She has been honored in her career for her absolutely good work. However, she debuted in 1982 but she is well known for her role as Rebecca Howe on the NBC sitcom ‘Cheers’, from 1987 to 1993.

Also, she is the winner of ‘Emmy Awards’ and ‘Golden Globe Awards’.

Kristie Alley, the daughter of Lillian Mickie and Robert deal Alley, was born on January 12, 1951, in Wichita, Kansas. Her nationality is American and her ethnicity is English, German, Irish, Scottish. She grew up with her two siblings  Colette and Craig.

Alley attended Wichita Southeast High School, for graduation in 1969. She did her college studies at Kansas State University in 1969. Later on, Alley moved to Los Angeles for her further studies in Scientology where she also worked as an interior designer. Alley participated as a contestant on the popular game show Match Game in 1979.

She won both rounds winning $500 in the first round and winning $5500 in the second round. She appeared on the game show named Password Plus in 1980.

In 1981, she faced big trouble as her parents had a car accident caused by a drunk driver, and her mother was killed. Also, she left her father seriously injured. Her father eventually recovered.

Kirstie Alley started her career from the debut in the science fiction film named ‘Star Trek II: The Wrath of Khan’ in 1982. But before coming into this field she worked as an interior designer and also appeared in two game shows and also won one of them.

Later, she appeared in numerous small films and also was seen as Virgilia Hazard in the ABC miniseries North and South, books I and II. Within her career, she had won two ‘Emmy Awards’. She was also starred in the comedy film Summer School along with Mark Harmon which became a big hit at the box office.

The same year she also joined the cast of NBC sitcom Cheers. She also gave the movie ‘Look Who’s Talking’ which was also a hit worldwide. In 1995, Alley was honored with a star on the Hollywood Walk of Fame at 7000 Hollywood Boulevard. Alley got a lot of success and earned many awards in her career.

Her hard work and dedication in her work lead her in the way of fame. She is well recognized for her good work in this field. Her net worth is estimated to be $40 million as of 2022.

Recently, this actress was trolled for supporting President Trump. The backlash was started after she said that she will vote for him.

Also get to know more about Kali Hawk, Camille Winbush, and Candice Bergen.

Single and Happy Parker Stevenson: The journey of his life and career