The stolen ‘kiss’ at the Royal Ascot that upset Prince Harry!

Updated On December 26, 2021 | In controversy , Interesting Facts , Lifestyle
Share this 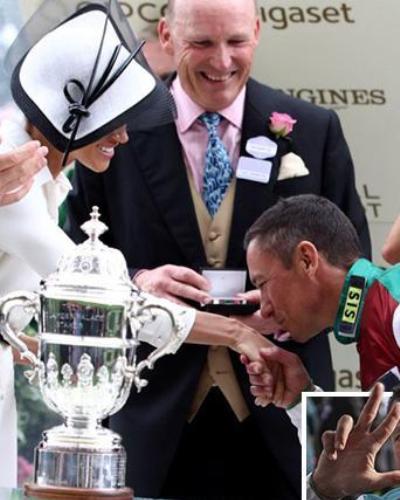 American actress Meghan Markle is now part of the royal family. But she has her admirers who might not have realized her elevation to royalty! Jockey Frankie Dettori was one of them and the incident at the Royal Ascot is proof of it!

The new bride Meghan Markle and her husband Prince Harry had joined the Queen to be at the race meeting for the first time. Almost a month after the wedding, Meghan and her husband looked good and adorable together.

She had worn a white shirt dress by the fashion house Givenchy that had also designed her wedding gown. She also had on a royal hat which was from the royal favorite Phillip Treacy.

It was her first experience at the English Royal Ascot. She had never been to the event before even as a private citizen and now she was a superstar there for the crowds and they greeted and cheered her as she and Harry went up the royal box. Harry was in a three-piece suit with a top hat.

Before the traditional carriage procession down the racecourse, Meghan, 36 and her husband Harry, 33 were with the Queen and the other senior royal household members for lunch at the Windsor Castle. The newlyweds remained close together and touched each other’s arms as they exchanged talks with the Queen, Prince Charles and the Duchess of Cornwall. Meghan was helpful to the Queen’s racing manager John Warren as he untangled his binoculars.

The new couple was just behind the Queen, 92 in the royal box, and then later presented trophies to Frankie Dettori and the winning connections of his horse Without Parole.

He had won the St James’s Palace Stakes and came out victorious in the race after holding off a late challenge from Gustav Klimt.

During the presentation ceremony, Frankie Dettori got cheeky and planted a kiss on Meghan’s hand as he happily accepted the prize from her.

The royal couple laughed and congratulated the winner Frankie but Harry did jokingly point and waggle his finger at the winning horseman after his open display of affection for Meghan. Meghan was just giggling at this sudden kiss.

Meghan had opted not to wear the name tag during this event though it was a royal code since her dress was made of silk and such light material which would imply that the name badge would pucker or leave noticeable marks if she attached it to her dress. Hence she avoided it. The Queen is allowed to not wear one.

Some new royal codes at the event

This year, there was a new Royal Ascot dress code that stated that men should wear socks and there was also increased security to crack down on binge drinking and use of the drug. To curb and detect these, there were tools such as breathalyzer tests, more drug sniffer dogs, and amnesty boxes for the disposal of illegal substances.

“The use of illegal drugs and their contribution to anti-social behavior is a significant issue for all major events.

“This year we will continue proactively to address these challenges in order to pre-empt incidents.”