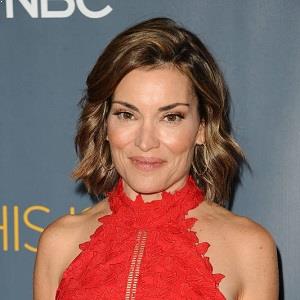 Kit Hoover is a married woman. She is married to the former director of programming and acquisitions for ESPN Classic and producer Crowley Sullivan.

At present, she resides in Los Angeles with her husband and their 3 children: two daughters named Hayes and Campbell and a son who has been given his father’s name i.e. Crowley Sullivan.

The couple has decided to keep their wedding date a secret.

Who is Kit Hoover?

Kit Hoover is an American television personality, sportscaster, and broadcast journalist. People know her for her stints on Access Hollywood Live, Fox News Channel, and ESPN.

Additionally, she has also guest-hosted on ‘The View’.

Hoover was born in Atlanta, Georgia on July 29, 1970. Most of the information relating to her early life and childhood is not available as of now.

She is of American nationality. Furthermore, there is no detailed information regarding her ethnicity and parents.

Talking about her education, Hoover attended high school in Atlanta at Marist, where she was a track star, winning three years consecutively both the mile and two-mile runs.

Later, she earned a B.A. in journalism from the University of North Carolina at Chapel Hill.

Kit Hoover initially made her television debut as a cast member on ‘Road Rules: USA – The First Adventure’. Next, she was hired as an entertainment correspondent for the ‘American Journal’, a nationally syndicated magazine show.

In addition, Hoover hosted Six Flags TV at the multiple Six Flags Theme Parks around the U.S. on July 27, 2008. Since September 13, 2010, she has co-hosted ‘Access Hollywood Live’ with Billy Bush, replacing Nancy O’Dell. Furthermore, she also has 3 credits as an actress.

Hoover garnered the Daytime Emmy Awards in 2014 for ‘Access Hollywood’ in the category of Outstanding Entertainment News Program which she shared with other television personalities.

Hoover has not revealed her current salary. However, she has an estimated net worth of around $3 million at present.

Hoover was indirectly dragged towards controversies due to her emotional comment defending Billy Bush after his scandal. At present, there are no rumors concerning her life and career.

Talking about her body measurement, Kit Hoover has a height of 5 feet (1.52 m). Additionally, she weighs around 56 kg.

Furthermore, her measurement is 36-23-35 inches. Her hair color and eye color is dark brown.

Hoover is active over social media. She has more than 28.5k followers on Twitter.

In addition, she has over 50.2k followers on Instagram. Similarly, her Facebook page has more than 14.6k followers.