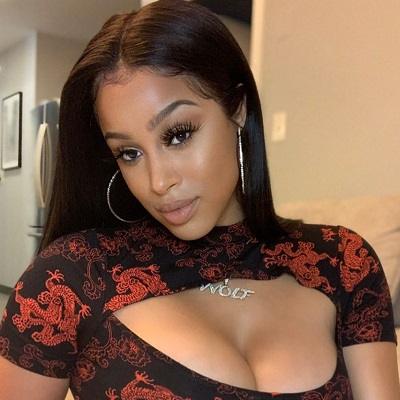 Previously, she was in a relationship with the rapper, Bow Wow. The former couple started dating back in January 2018. Even the rumors were that they were married to each other as the rapper called himself her husband.

Later, in Spring 2018, she shared that she is pregnant with his child. Sadly, the couple ended with a miscarriage. Eventually, the couple broke up with each other as the relationship went through a very tough time.

Who is Kiyomi Leslie?

American Kiyomi Leslie is an Instagram star and TV personality. She is renowned as the ex-girlfriend of the rapper, Bow Wow.

Kiyomi Leslie was born as Leslie Holden on the 29th of March 1991 in Raleigh, North Carolina. She is of Scottish ethnicity.

Till the date, she has not shared names on her family background including her father and mother. Her father had spent 20 years in prison for the drug case.

She has an elder brother, David is a bodyguard of the Washington Wizards point guard John Wall.

Talking about her educational background, she completed her schooling from Wakefield High School.

In November 2016, Kiyomi Leslie started posting on Instagram with a video. Within no time, the video went viral that inspired her to post such content to social media sites.

Moving forward, she gripped the attention of a huge audience making her an Instagram model. Prior to that, she used to be an exotic dancer at The Men’s Club of Raleigh.

Later, in 2018, she appeared in the TV series, Growing Up Hip Hop: Atlanta. Last, in 2020, she joined the series Love & Hip Hop: Atlanta as the latest face of the series. Currently, she is working in her music career.

The primary source of her income is her Instagram post. Besides that, she also makes through her merch too.

Kiyomi Leslie has brown eyes with brunette hair. However, she prefers to change her hair colors from blonde to brown.

Recently, she has been in the headlines for an audio clip that is leaked in social media. In the audio call, a woman claimed to be Kiyomi is asking for the man said to be the rapper, Bow Wow to leave the room.

Also, the woman said, he pouched her in the stomach during her pregnancy. Due to this reason, the rapper is facing a huge backlash from his fans and followers.

In 2019, she and Bow Wow were arrested in the charge of a battery. At the time, the police were unable to determine who is aggressive among them. Due to this reason, both of them were arrested.

She has a self-titled YouTube channel with around 10.1k subscribers and more than 331.6k views.

You may also read the bio of Julius Cowdrey, Lara Trump, and Justine Simmons.