Who is Klava Koka dating?

Klava Koka is possibly single. She has not shared anything regarding her love life. She does connect with fans on her Instagram daily life updates, but she has never shared about his love life.

Previously, there were rumors of her being in a relationship with Dima Gordey, a blogger. But it is not confirmed if they are still together, dating, or has spilt up. 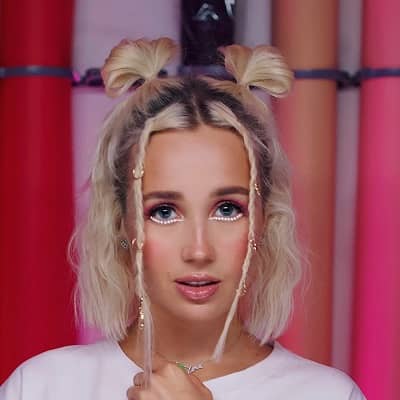 Klava Koka is a Russian singer, composer, and YouTuber. She began her professional career in 2015 when she won the casting show Molodaya krov and was signed to the Russian record label Black Star (“Youngblood”).

Klava’s birth name is Klavdiya Vadimovna Vysokova. She was born on July 23, 1996, in Yekaterinburg, Russia. As of now, she is 25years old. She went to Moscow with her family when she was a teenager.

She competed in the Ya-artist singing competition in 2012, reaching the final. Talking about her nationality, she holds a Russian identity.

Klava has not revealed the names of her parent. However, as per sources, she has one brother named Leo and a sister named Lada.

Vysokova studied public service and management at the Russian Presidential Academy of National Economy and Public Administration after finishing her secondary education.

Vysokova is a Russian singer, composer, and Youtuber. She competed in the Ya-artist singing competition in 2012, reaching the final. Koka released her first studio album, Kusto, in 2015, which featured country-pop songs.

Vysokova later competed in the casting show Molodaya krov in 2015. She eventually won, and as part of her award, she was signed to the Russian label Black Star. Klava started performing renditions of international songs translated into Russian on her YouTube account, which she founded in 2017. She became a host on the travel shows Oryol I Reshka the next year.

With the release of the single “Vlyublena v MDK” in 2019, Vysokova’s appearance and musical style were drastically altered. Later that year, she released her second studio album, Neprilichno o lichnom.

Forbes Russia named Vysokova one of the 30 Most Promising Russians Under 30 in 2021. Vysokova is also the Russian face of companies including Pepsi, Garnier, and KitKat.

As of 2022, Klava Koka has an estimated net worth of $ 1 million while her exact income, salary, and earnings are not revealed yet.

Dima Bilan criticized Klava Koka for publishing an article with Olga Buzova in which Olga is reported to be drunken.

In mid-January, Klava and Olga traveled along with the icy Courchevel with a scandalous video.

Klava Koka has a height of 5 feet and 5inches and weighs around 50kgs. She has a fair skin complexion and beautiful light green eyes.

Klava has a slim and lean body and has a blonde hair color. She often dyes her hair color.

Klava has a huge fan following on Instagram under the username @klavacoca with 8 million followers. Likewise, she has her own Youtube channel where she has gained over 4million subscribers.

While Klava has garnered over 9.6million followers on her Tiktok account.

Know more about, Tom Fletcher, Erik Stocklin, and That Poppy.