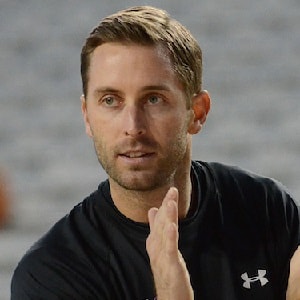 Work ethic is the most important component of being successful.

If we lose a game, I change up what I did that day, like if I eat something that day I will not eat the same thing again the next game day.

My mom was an enthusiastic, positive, glass-is-half-full type of person and that is how I live my life and I owe that to her. She was an amazing woman.

What is the relationship of Kliff Kingsbury?

Kliff Kingsbury is rather secretive about his personal life. He has seldom spoken about his past and present relationships in any of the interviews that he has been part of.

Currently, there is no information regarding the present relationship that he might be involved in. However, he is believed to be single at present.

Who is Kliff Kingsbury?

Kliff Kingsbury is an American football coach and former quarterback. He won the Sammy Baugh Trophy in 2002. Currently, he is the head coach of the Texas Tech Red Raiders football team, where he played from 1998–to 2002.

Kliff was born in San Antonio, Texas on August 9, 1979, to the father, Tim Kingsbury, a Vietnam War veteran, and mother Sally who died in 2005 of soft tissue sarcoma.

He became interested in football in his childhood years. He is of American nationality. Additionally, he has not revealed information regarding his ethnic background at present.

Furthermore, he revealed that his both parents were a teacher and his mom taught government and economics while his dad, in addition to being a football coach, taught world history and US History during his early life.

Kliff Kingsbury played football during his school days for the school team as a quarterback. Next, he continued playing football at the college too. During his college years, he played under coach Spike Dykes from 1998-to 1999.

Furthermore, he played under Mike Leach from 2000-to 2002. He created 39 school records and 13 Big 12 Conference records. Moreover, he also set 7 NCAA FBS records.

The coaches picked Kliff for All-District first-team selection and All-Big 12 Conference second-team after his excellent performance. Eventually, he won the Sammy Baugh Trophy at the end of the 2002 season as the nation’s best college passer.

Furthermore, he was also voted for the Heisman Trophy voting where he was able to get 9th place. He also received a scholarship from the National Football Foundation and Hall of Fame.

On September 6, 2004, he signed for New Orleans Saints and spent his whole 2004 season with the club. He also participated in the NFL Europe and Canadian Football League.

Kliff began his coaching career in 2008. Next, he joined the University of Houston as a couch till 2011. He later joined the former coach Kevin Sumlin as an offensive coach for Texas A&M for the 2012 season.

Eventually, Kliff rejoined Texas Tech as the 15th full-time head coach on December 12, 2012. He is now with a team named Arizona Cardinals since 2019.

Is Kliff Kingsbury involved in any rumors and controversies?

Kliff became part of a controversy after Davis Webb blamed a “lack of communication” during the season with Kliff on his way out the door. This criticism surrounded him with several other controversies.

Talking about his body measurement, Kliff Kingsbury has a height of 6 ft 3 inches and has an average weight. Additionally, his hair color is dark blonde/black and eye color is hazel blue.

Kliff is fairly active on social media. He has a huge number of followers on social networking sites such as Facebook and Twitter. He has more than 139k followers on Twitter.

Similarly, his Facebook page has more than 58.7k followers and he has over 36.3k followers on Instagram.

Holly Sonders is not just good at playing Golf…but also her looks are Attention-Grabbing through her career, lifestyle