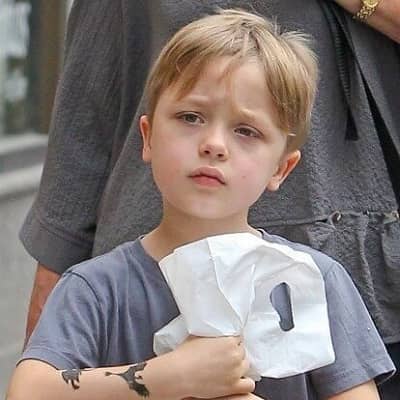 What is the relationship of Knox Jolie-Pitt?

Knox Jolie-Pitt is still not mature enough to be in a relationship.

However, his parents, Angelina and Brad got married in France in 2014. His siblings, Maddox and Pax walked down the aisle with them, Zahara and Vivienne were the flower girls and Shiloh and Knox were the ring bearers.

In September 2016, Angelina filed for divorce from Brad because of irreconcilable differences. Angelina took the sole physical custody of the children and Brad was granted permission to visit the children on a regular basis.

Who is Knox Jolie-Pitt?

Knox Jolie-Pitt is a French-American renowned as the child of popular and well-known celebrities, Brad Pitt and Angelina Jolie. He was a hot topic on the internet as soon as he was born into this world.

What are the birth facts of Knox Jolie-Pitt?

Knox Jolie-Pitt was born on July 12, 2008, at the Lenval Hospital in Nice, France, at 6:27 pm. His twin sister, Vivienne Marcheline Jolie-Pitt was born along with him. They were delivered through C-section at the Santa Maria clinic of the Lenval Foundation. His parents decided on his name during the pregnancy.
Likewise, he is the son of movie stars, Brad Pitt and Angelina Jolie. However, his parents got divorced but he is taken care of by both his parents. Knox and Vivienne have an elder sister, Shiloh Jolie-Pitt. Their other three siblings are Zahara Marley Jolie-Pitt, Maddox, and Pax who were adopted by the stars.
Moreover, he holds citizenship in France and America. Likewise, he has a mixed ethnicity of German, Polish, Slovak, Huron First Nations, Dutch, and French-Canadian ancestry on his mother’s side and English, Irish, Scottish, Welsh, Dutch, French, Scots-Irish/Northern Irish, Cornish, Swedish, German, and Channel Islander/Jersey descent on his father’s side.
Furthermore, he was homeschooled with his siblings.

Knox and his twin sister Vivienne’s first picture was sold for $14 million which created a world record for the most expensive celebrity kids’ first-look picture. However, the money was all donated to the Jolie-Pitt Foundation.
In 2016, he shared his voice as the character of Ku Ku in the animated flick ‘Kung Fu Panda 3.’ He is currently learning to fly planes. He is learning to use pedals and is not mature enough to fly solo. Likewise, he is concentrated on planes and the technical aspects of flying. It is only a matter of time to know if he follows the footpath of his parents.

The popular twins are not available on any social media platforms.

How much is the net worth of Knox Jolie-Pitt?

Knox is still a child enjoying his childhood presently. So, he is not active in any profession involving a salary.

Knox has never made any headlines for rumors and controversies.

He weighed around 5 lbs at his birth. His current weight and height are unavailable. Likewise, he has got light brown colored hair and charming blue eyes.