Skip to content
Married Biography
Married Biography / Entertainment / Update! Basketball Legend Kobe Bryant And His Daughter Gianna Along With 7 Other Passengers Died In The Helicopter Crash In California!

The late basketball legend was the family man with his wife Vanessa Laine Bryant and four children. The news of the death of the basketball player has left everyone devastated and sad.

Kobe Bryant and Gianna died in the helicopter crash

The NBA legend Kobe Bryant and her daughter were going to Mamba Sports Academy on the private helicopter. There were seven other people in the helicopter Sikorsky S-76B along with the pilot. Everyone died on the crash on the helicopter which crashed into a hillside in Calabasas.

On Sunday they were about to show up in Mamba Sports Academy in Thousand Oaks for a basketball game. Gianna was about to play on the game, meanwhile, Kobe was about to coach.

The helicopter crashed about 30 miles northwest of downtown Los Angeles. Los Angeles County Fire Department Chief Daryl Osby mentioned that the crash caused a bush fire and everyone on the crash died.

The basketball player had loved it with the helicopter. About a decade ago, GQ Magazine mentioned he always took his own helicopter to the work. At the time, he mentioned:

“He takes a private helicopter from Orange County, where he lives with his wife and two children, to every home game. It’s a nice dash of glitz, a touch of showbiz (but) Bryant says the helicopter is just another tool for maintaining his body. It’s no different than his weights or his whirlpool tubs or his custom-made Nikes.”

At the time, the sources also mentioned because of broken fingers, fragile knees, sore back, and achy feet won’t let sit in the car for more than two hours.

Other people on the crash

“My kids and I are devastated. We lost our beautiful wife and mom today in a helicopter crash. Please respect our privacy. Thank you for all the well wishes they mean so much.”

Just like her father, Gianna also followed the footsteps of Kobe. The father-daughter duo shared the same love for the basketball.

Back in 2018, in Jimmy Kimmel’s Live, he mentioned she wanted to play in the WNBA. The NBA legend started his career in the NBA after high school.

He also became the league’s youngest player in history. The NBA player spent the next 20 seasons of his professional career with the Los Angeles Lakers.

Kobe also stated to the Los Angeles Times last year Gianna whose nickname is Gigi was fixed on playing for the University of Connecticut and in the W.N.B.A.

Last year the father-daughter duo showed up in UConn’s senior day rout of the University of Houston. At the time, the coach mentioned his presence caused some nerves for the players. Furthermore, the coach stated:

“Kobe was a little bit of a distraction. We were hoping he would just send Gigi, his daughter, and him stay home so he wouldn’t cause that distraction but we couldn’t arrange that.”

You may also read- An update! Death of Chef Gary Rhodes was due to subdural hematoma!

Vanessa Laine Bryant is an American model and businesswoman. Additionally, she is the wife of former Los Angeles Lakers guard Kobe Bryant. She has also appeared in ‘Keeping Up with the Kardashians’. See more bio…

You may also read- The 2-year-old daughter of country singer Ned LeDoux, Haven chokes to death!

Top 10 Pictures Of Kobe Bryant With His Wife And Children You Don’t Want To Miss!!
Tags : Basketball player NBA player 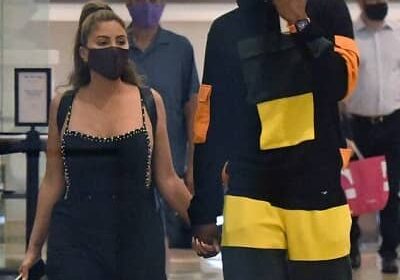