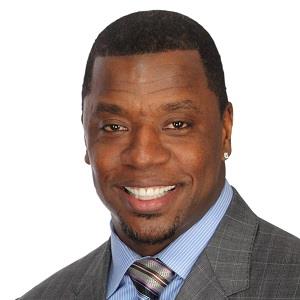 My focus is on always trying to treat the inevitable highs and lows of life with the same blissful, calm energy

That's the fun part of it all. You get creative when you're in Little League. You're creative when you're in middle school. You're creative in high school and college. And then when you get to the league, this position, the more mobile quarterbacks, we have a tendency to want to become traditional and nervous and panicky in how we want to call plays and put guys in position to make plays

You have Tiger Woods, Michael Jordan... and Mario Lemieux. He's the best in hockey, in my opinion.

Kordell Stewart was once a married man but now he is a divorced and single man at the present time. He was previously married to Porsha Williams, an American TV personality. The couple got married in 2011. They stayed together for almost three years and divorced in 2013. Before his marriage, he was in a serious relationship with Tania Richardson and they together had a son named Syre. No any information about their dating history has been revealed to the media yet. After his divorce with Porsha, he began dating the famous American singer Towanda Braxton in 2013. The couple dated each other for several months and broke up later that year. There are no any other records of his past and present relationships. There is no news of his present love life and it seems like Stewart is single at the present time.

Who is Kordell Stewart?

Kordell Stewart is a former American football player who played eleven years as a quarterback in the National Football League (NFL). He is famous by his nickname Slash. He is one of the most versatile football players in America. He led the Pittsburgh Steelers to the AFC Championship game in 2001.

Kordell was born on 16 October 1972, in Marrero, Louisiana, United States. He is an American by nationality and is of African-American ethnicity.

He was educated at John Ehret High School. After high school graduation, Stewart got a scholarship at the University of Colorado in 1991 and played under Coach Bill McCartney. He became one of the most prolific quarterbacks in school history, setting several Buffaloe’s records, including most passes completed, most passing yards, and most touchdown passes.

Stewart began his football career playing as a quarterback for the University of Colorado in 1991. He was the 60th player selected in the 1995 NFL draft. He joined Pittsburgh Steelers in 1997 and he got his chance to start at quarterback. He began playing as a starting quarterback in 2002.

The following year, he signed as a free agent with the Chicago Bears and was named the starter. Kordell was signed by the Baltimore Ravens in 2004. He played in various positions such as quarterback, receiver, and rusher. He appeared in January 2009 as an analyst on ESPN’s College Football Live, and then later appeared again in July during the show’s “50 States Tour” for the show’s episode regarding Colorado athletics.

He appeared in January 2009 as an analyst on ESPN’s College Football Live, and then later appeared again in July during the show’s “50 States Tour” for the show’s episode regarding Colorado athletics. Stewart previously worked as a sideline reporter for United Football League and he is currently working as an analyst on various ESPN shows such as NFL Live, NFL 32, Take 2, and Mike and Mike in the Morning.

Kordell Stewart: Salary and Net Worth

He has a net worth of $16 million but his salary is not revealed yet.

There is no rumor of him being in any love affair at this time. He is rumored to be a gay but it has not been confirmed yet.

Kordell Stewart has the height of 6 feet 1 inches. His body weighs 99kg. He has black hair and black eyes.

Furthermore, also find out more about the early life, career, net worth, relationships, and controversies of football player like Marouane Fellaini, Giovanni Graziano, and Peyton Hillis.