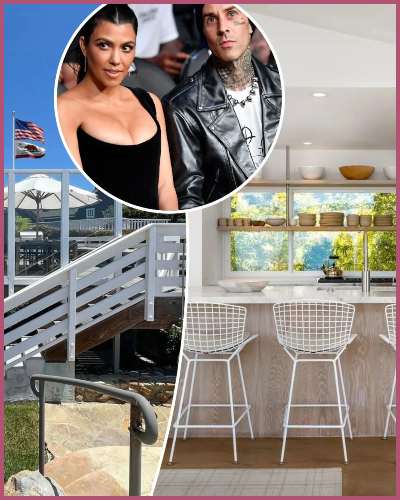 How much did Kourtney and Travis pay for their new house?

Kourtney Kardashian and Travis Barker have owned a new property together. The first home Kardashian and the Blink-182 drummer purchased together after getting married.

The newlyweds, who tied the knot in May with a courthouse wedding, bought a beach house on Friday, October 21 for $14.5 million. Kourtney and Travis’s new home used to belong to talk show host Conan O’Brien who bought it for $7.9 million in 2015 and completely renovated it.

Although O’Brien has made a nice profit on the home, the TV personality has previously listed his property for $ 16.5 million. The 2100-square-foot home featured panoramic ocean, island, and coastline views.

Also read Is Kourtney Kardashian Pregnant or Its Just a Rumor?

Similarly, there are two great bedrooms with a granite kitchen, a breakfast bar, and a soundproofed balcony. On the lower level of the house, there’s a playroom/gym with a large-screen TV, a laundry room, a changing room with a shower, and more.

Apparently, there is a detached guest house that has another two bedrooms. The guest house featured a two-car garage with a Tesla charging station and a built-in BBQ.

The oceanfront property is located in the low-key town of Carpinteria, California, near Santa Barbara, which is seemingly one of the couple’s preferred destinations.

Further, they have cordial neighbors too; Ashton Kutcher and Mila Kunis, who own a house just a few doors down.

The Couple has been living in separate homes

The Kardashian star and her husband Travis have finally moved in together. The two have been living in the same neighborhood within walking distance in Calabasas, California.

Earlier this month, Kourtney spoke about why they don’t live together during an appearance on the Not Skinny but Not Fat podcast. The Poosh founder, 43, hinted that she was looking for a shared place with the Blink 182 drummer. She stated,

“We want our kids to also feel really comfortable and they have both lived in their homes their whole lives for the most part, and they each have their rooms and we are a block away,”

Kourtney Kardashian is an American television personality, model, businesswoman, and socialite. She is best known for the reality series ‘Keeping up with the Kardashians’.

With the success of ‘Keeping up with Kardashians’ she even appeared in ‘Kourtney and Khloe Take Miami’ and ‘Kourtney and Kim Take New York’. She is also an author who has written ‘Kardashian Confidential’. See more…