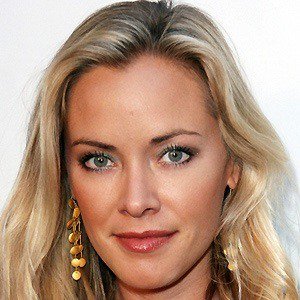 I worked with a mime coach. I did weapons training. I did weight training.

I think I can try the film world out for a while.

Previously, she married Noah Danby on May 10, 2008. The couple tied their knot at her family’s farm on May 10, 2008. But the couple couldn’t give their relationship the right path and ended with divorce in 2009.

The reason behind their separation was she was dating a woman, hence she is a bisexual.

Who is Kristanna Loken?

Kristanna Loken is an American actress and model who is best known for her performances in ‘Terminator 3: Rise of the Machines’ in 2003, ‘BloodRayne’ in 2005 and ‘Bounty Killer’ in 2013.

She was born on October 8, 1979, in Ghent, New York, USA. Her father’s name is Merlin ‘Chris’ Loken and her mother’s name is Randee (née Porath).

Her father is a writer and apple farmer whereas her mother is a model. Loken’s parents were from Wisconsin and she belongs to half German and half Norwegian ancestry. She grew up in Upstate New York on her parent’s fruit farm. She has got a sister named Tanya who is 16 years older than her.

Loken holds American citizenship but her ethnicity is a mix of German and Norwegian.

Talking about her education, she has not disclosed any information about her college and university names. However, it is under review.

Kristanna Loken began modeling at the age of 15 after she was encouraged by her mother. She ended being in the 3rd position at the 1994 Elite Model Look. She debuted her acting career from the episode ‘As the World Turns’ in 1994. After that, she appeared in the television shows like ‘Phily’, ‘Unhappily Ever After’, ‘Boy Meets World, etc.

She made her breakthrough from the role of cyborg T-X in the movie ‘Terminator 3: Rise of the Machines’ in 2003. She portrayed the leading role in the film version of a video game, ‘BloodRayne’ in 2006, and appeared in 10 episodes of the fourth season of ‘The L Word’.

In addition, she starred in the movie ‘Mercenaries’ in 2014 and recently appeared as Adriana Stabilito in ‘Lethal Weapon’ in 2017.

She was also nominated for Golden Schmoes in the category Best T&A of the Year in ‘Terminator 3; Rise of the Machines’ in 2003, and also nominated several times in her career.

There was a  rumor that she was dating Michelle Rodriguez in November 2006 but neither of them has talked about the rumor.

Kristanna Loken has an hourglass body shape with a slim body build. She has a height of 5 ft 11 inches and weighs 59 kg. Loken has blue eyes and blonde hair.