Kristen Alderson is an unmarried woman till now. She hasn’t been in many relationships in her life. She dated her General Hospital co-star Chad Duell at the beginning of 2013. The couple was in a relationship for over two years. After dating each other for over two years, the couple broke up in October 2015.

Since then, there is no any record of her relationship till now. According to the records, she is possibly single at the present time. 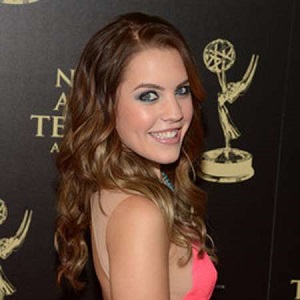 Who is Kristen Alderson?

Kristen Alderson is an American actress.  She is best known for her portrayal as Starr Manning on the ABC daytime soap opera One Life to Live from 1998 to 2012. She is also famous for reprising her role as Starr in General Hospital from 2012 to 2015.

Kristen Alderson was born on 29 May 1991, in Bucks County, Pennsylvania, USA. Her birth name is Kristen DeAnn Alderson. She is the daughter of Richard Alderson and Kathy Alderson. Kristen has a younger brother named Eddie Alderson who is also an actor.

She has not revealed any information about her educational background. Her nationality is American but her ethnicity is undisclosed. When she was six years old, Alderson auditioned for the One Life to Live role of Starr Manning in February 1998 and won the role.

Her younger brother Eddie portrayed Matthew Buchanan on One Life to Live until its cancellation. The show was canceled in 2012. After that, she reprised her role of One Life to Live at ABC’s General Hospital in 2012. She debuted on the series on February 24, 2012, and left the series in March 2013.

Alderson later returned to General Hospital as Kiki Jerome. In 2013, she received a “Daytime Emmy Award for Outstanding Younger Actress in a Drama Series” for her work in General Hospital.

In September 2013, she was honored as “The Star of Tomorrow” by the ZEPHRA Magazine Recognition Awards. She earned nominations for two Daytime Emmy Awards in 2014 and 2015.  She has a net worth of 3 million dollars as of 2022.

Kristen has a height of 5 feet 4 inches and weighs 52 kg. Her hair color is brown and her eye color is blue. Her body measurement is 33-24-35 inches. Her shoe size is unknown.

Also get to know more about the birth facts, education, career, net worth, rumors, height, and social media of different personalities like Erica Rose (Actress), Lucie Arnaz, and Samantha Giancola.