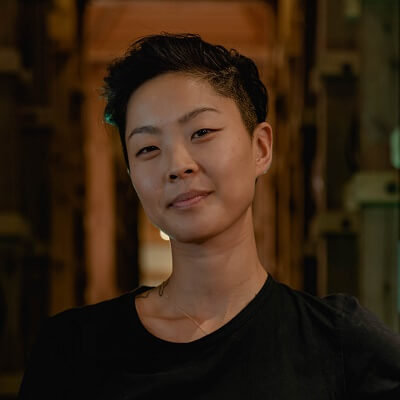 Kristen Kish is in a serious relationship.

She is engaged to her partner, Bianca. The couple was in a relationship for some time before getting engaged. Kish announced their engagement on September 29, 2019, through a post on Instagram. The lovely couple is seen spending time together a lot. They both love traveling and go on vacation regularly.

Previously, she was in a relationship with Jacqueline Westbrook. On their anniversary on March 28, 2014, Kristen came out as a lesbian.

Who is Kristen Kish?

Kristen Kish is a Korean-American chef. She became popular for winning Season 10 of Top Chef and becoming the second female ever to win the show. Formerly, she was the chef de cuisine at Menton. Moreover, she is also the host of the TV show, ’36 Hours’.

Kristen Kish was born in Seoul, South Korea as Kwon Yung Ran on December 1, 1983. As of 2020, her age is 36. After living in a few orphanages as an infant, American parents adopted Kish when she was just four months old. A family from Kentwood, Michigan adopted her at the age of four months. She has not revealed the identity of her parents. However, she is very close to her dad and wrote him a tribute in 2017 on her Facebook page. Similarly, there is no information about her siblings and other family members.

Her ethnicity is Korean.

For education, she went to Le Cordon Bleu in Chicago. From there, she earned her Associates’s degree in culinary arts.

From 2012 to 2017, Kish worked as the chef de cuisine in Barbara Lynch’s Menton Boston. She began her Top Chef Journey in 2012. She entered the main competition by surviving a soup challenge which was judged by Emeril Lagasse.

After winning four elimination challenges in which she created dishes including French cuisine and onion rings, she got eliminated in the 11th episode, “Restaurant Wars”. After five wins in “Last Chance Kitchen“, she made it to the finale of the main competition.

In the finale, she became the winner of the Top Chef and became the first-ever competitor to win the competition after winning “Last Chance Kitchen” and also became the second female winner in the history of the franchise.

In 2015, she co-hosted the pilot season of ’36 Hours’, the TV series broadcasted on the Travel Channel. The show is an adaptation of the New York Times travel column and follows the co-hosts Martino and Kish and spending 36 hours eating, drinking, and exploring a city.

In 2017, Kristen released a book of recipes co-authored by Meredith Erickson, ‘Kristen Kish Cooking: Recipes and Techniques’. In May 2018, she became chef at her own restaurant, Arlo Grey, in Austin, Texas.

There are no rumors about Kish. Also, she has not been a part of controversies. She is very much focused on her career as a chef and is heading in the right direction.

You may also like to read the Bio, Body Measurements, Career, Social Media, and more of Chris Santos, Sandra Lee, Noah Galuten, and more.

Turkish TV series and dramas are becoming a hot favorite of many people worldwide even more than Hollywood movies!