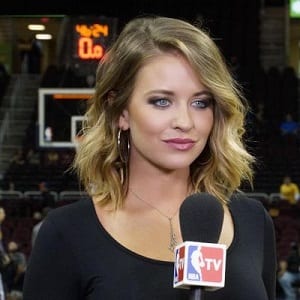 Kristen Ledlow was previously in a relationship with a basketball player whose details are not known. There are no records available of Kristen’s other relationships. At present, she is believed to be single.

Who is Kristen Ledlow?

Kristen Ledlow is an American sports anchor. Currently, she serves as the host of ‘NBA Inside Stuff’ on NBA TV. Additionally, she previously worked as a sports anchor for HLN and CNN.

Ledlow was born in Atlanta, Georgia on January 18, 1988. She was born to parents Roger Ledlow and Rita Ledlow. Additionally, she has a sister, Lauren Ledlow. She was interested in the world of sports as a child and hence played basketball and volleyball in her school. She is of American nationality. Furthermore, there are no details available about her ethnicity at present.

Talking about her education, Ledlow attended Christian Community School. Later, she also attended North Florida Christian School. Additionally, she was enrolled at Southeastern University in Lakeland. There, she majored in broadcasting and communications and minored in business.

Ledlow initially played volleyball and was an All-American volleyball player with her school. In addition, she also served as lead announcer for the men’s basketball games. She won the Miss Capital City USA pageant during her senior year. Kristen became an anchor at WTXL-TV after graduating from college. Eventually, she hosted the ‘Good News Show’.

Ledlow soon became a sideline reporter for Florida State Seminoles football games. Additionally, she also became the co-host of ‘The Opening Drive’ on CBS Sports Radio. She worked alongside Jason Bailey and Randy Cross after joining WZGC as a host. She later left the station on March 2014. NBA TV hired Ledlow as a host for ‘NBA Inside Stuff’ in 2015.

Ledlow has not revealed her current salary. Furthermore, there are no details available about her net worth at present.

There was a rumor which suggested that Ledlow might be dating basketball star Joakim Noha. This, however, has not been confirmed by either of them. Additionally, she made the news in 2016 after she was robbed at gunpoint at her home. At present, there are no rumors concerning Ledlow and her career.

Talking about her body measurement, Kristen Ledlow has a height of 5 feet 8 inches. Additionally, she weighs around 59 kg. She has a body measurement of 36-25-37 inches. Furthermore, her hair color is blonde and her eye color is blue.