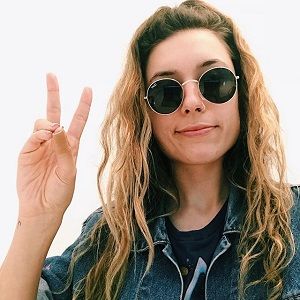 The 23-year-old American social media star, Kristen is an unmarried woman. As of now, she is in a relationship with famous YouTuber Scotty Sire. They began dating for several months and are still together. Furthermore, the lovebirds also spotted several times in their social media accounts.

Who is Kristen McAtee?

Kristen McAtee is a famous American YouTube and Instagram star. She rose to prominence after appearing as a guest in the videos of Scotty Sire and Toddy Smith.

Currently, she has earned 808k subscribers on her YouTube channel and more than 765k followers on Instagram.

Kristen was born on March 28, 1995, in Contra Costa, California, USA. Talking about her nationality, she is American and her ethnicity is unknown. From the beginning of her childhood, she had a keen interest towards fashion and designing.

There is not any information regarding her family background. Concerning in her education, this popular YouTube star completed her graduation from the Fashion Institute of Design & Merchandising with a degree in merchandise marketing.

Kristen began her YouTube career just a year ago on 27 November 2016, when she first created her channel.

She rose to prominence after appearing as a guest in the videos of Scotty Sire and Toddy Smith. Currently, she has earned 808k subscribers on her YouTube channel. Furthermore, her popularity claimed a huge success from her relationship with YouTuber Scotty Sire.

Additionally, she is also a social media celebrity with more than 765k followers on Instagram and almost 239k followers on Twitter. Many of her videos have gained millions of views. Some of her most viewed videos are COVERING UP MY BOYFRIEND’S TATTOOS, Pizza Challenge with Liza Koshy, Making Ugly Sweaters with Liza Koshy, and Reacting to Old Instagram Pics.

For being a successful social media celebrity, she is also a graduate student of fashion and design merchandise. In addition, Kristen has also worked for some big companies including Threadflip and Chan Luu Incorporation.

Being a famous YouTube and Instagram star, she pockets a handsome amount of money from her profession. However, her salary and net worth are unknown.