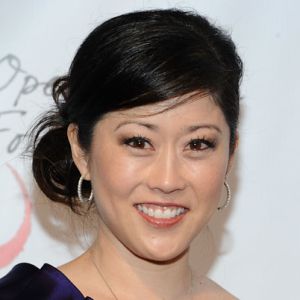 As a professional, I think we're not being judged solely on technical ability anymore. People really want to be entertained and enjoy what they're watching

I learned to put 100 percent into what you're doing. I learned about setting goals for yourself, knowing where you want to be and taking small steps toward those goals. I learned about adversity and how to get past it

At 6 years old, the ice became a place for me to express myself. Because I was so shy off the ice, it became my safe haven, with music and freedom and self-expression. That was my emotional outlet.

Kristi Yamaguchi is a married woman since a long time. She is married to the retired American hockey player Bret Hedican. They first met each other for the first time at the 1992 Winter Olympics when Bret played for Team USA. The couple dated each other for several years before getting married. They got married on July 8, 2000. They together have two daughters named Keara Kiyomi, born in 2003 and Emma Yoshiko, born in 2005. They have been married for 12 years now and their relationship is still going very well. The couple currently resides in Alamo, California.

Who is Kristi Yamaguchi?

Kristi Yamaguchi is a former American figure skater. She won an Olympic gold medal in the 1992 Albertville Olympics. She has also won two World Figure Skating Championships. She became the celebrity champion in the sixth season of Dancing with the Stars.

Kristi Yamaguchi was born Kristine Tsuya Yamaguchi on 12 July 1971, in Hayward, California, USA. Kristi is an American by nationality and she is of Japanese ethnicity.

She is the daughter of Jim Yamaguchi, a dentist, and Carole Doi, a medical secretary. Her paternal grandparents and maternal great-grandparents immigrated to the United States from Japan. She has two siblings named Brett and Lori. She grew up in Fremont, California with her siblings.

She was home-schooled for her first two years of high school, but attended Mission San Jose High School for her junior and senior years and graduated from there. She began skating and taking ballet lessons when she was a child.

In 2008, Yamaguchi participated in the sixth season of Dancing with the Stars and became the celebrity champion. She received the Inspiration Award at the 2008 Asian Excellence Awards. That same year, she earned the Sonja Henie Award from the Professional Skaters Association.

In 2010 she worked as a daily NBC Olympics skating broadcast analyst on NBC’s Universal Sports Network. During the 2010 Winter Olympics, she was also a special correspondent for the Today Show. She has her own wear line called Tsu. ya by Kristi Yamaguchi.

Kristi Yamaguchi: Salary and Net Worth

Kristi has a height of 5feet 1 inches. Her body weighs 42kg. She has black hair and dark brown eyes. Besides these, her body figure measures the size of 22 inches by waist size and 34 inches by hip size. Additionally, her shoe size is 6.5 US and her bra size is 33A.

Furthermore, I also find out more about the early life, career, net worth, relationships, and controversies of figure skaters like Jeremy Abbott, Evan Lysacek, and Caroline Zhang.