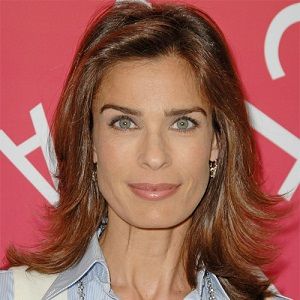 What is the relationship of Kristian Alfonso?

Kristian Alfonso has been married twice till now. Currently, she is in a marital relationship with Danny Daggenhurst. The lovebird got married on October 13, 2011. This was her second marriage.

Danny and Kristian have a child together named, Jack. Jack was born on July 18, 2002. As of now, they live happily without any sign of separation or conflict.

Before this marriage, she was married to Simon Macauley. Simon and Kristian tied the knot in 1987. Together they gave birth to a child named, Gino William.

Gino was born on October 2, 1990. But after a couple of years in 1991, they got divorced as they couldn’t work out together.

Who is Kristian Alfonso?

Presently, she is known for starring in an American daytime soap opera, “Days of Our Lives.” She portrays the role of ‘Hope Williams Brody’ since 1983 in the show.

Kristin Alfonso was born in Brockton in the state of Massachusetts in the United States. She was born Kristian Joy Alfonso on September 5, 1963. Her father’s name is Gino Alfonso.

Similarly, her mother’s name is Joanne Alfonso. Her ethnic background traces back to Italian descent. Skating intrigued her from a young age. But an accident destroyed her skating career. During her childhood, she grew an interest in skating. Athleticism pretty much sums up her early life.

Discussing her education, there is no information regarding it.

Kristian Alfonso skated until she caught an accident. Afterward, she started modeling. By the age of fifteen, she already had been featured in around 30 magazines.

Similarly, she featured in the main magazines like ‘VOGUE,’ and ‘Haper’s Bazaar.’ Then she made some appearances on TV. Soon after, she entered the acting industry. In 1983, she joined the cast of the TV show “Days of Our Lives.”

Since then she has been playing the role of ‘Hope Williams Brody till now. Additionally, she acted in another TV series, “Falcon Crest” in 1987. Discussing her debut in the film, she appeared in “Joshua Tree” in 1993.

Furthermore, some of her other TV projects are “Full House,” “Amazing Stories,” and “Baywatch.” Kristian is also an owner of ‘Hope Faith Miracles,’ which is a jewelry line. She is paid a good amount of salary. Presently, her net worth is projected at around $ 5 million as of 2022.

Kristian Alfonso is a veteran actress. She has been able to maintain her image to the public. Additionally, she keeps her focus on productive work only. It keeps her image clean. Consequently, she is away from any rumors or controversies.

Kristian Alfonso still looks beautiful and graceful in her fifties. Her height is 5 feet 4 inches. Kristian maintains her amazing body figure of 36-24-35 inches. She has brown hair and green eyes.