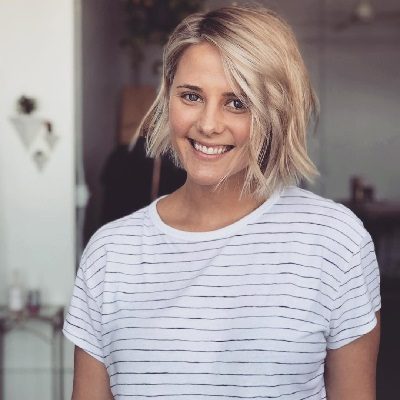 Kristian Haggerty is dating the aspiring singer, Taylor Blake. Initially, they started their relationship as a friend. Now, they have decided to take their relationship to the next level. Also, they share their pictures on Instagram where they are having a good time with each other.

Prior to that, she was dating the Demi Burnett. They started seeing each other in 2019. However, they broke up with each other. Now the Bachelor in Paradise contestant is again dating the singer Slater Davis.

Who is Kristian Haggerty?

American Kristian Haggerty is a TV personality. Haggerty is renowned for her appearance in the Bachelor’s in Paradise.

Currently, she is working as the sales Consultant for LightWork Software.

Kristian Haggerty was born on the 4th of April 1992 in Florida. She is of Irish ancestry.

In 2010, she attended Stetson University in DeLand, Florida with the crew scholarship. Four years later, she graduated from the University with Honors in Business Administration.

During his University days, she was active in extracurricular activities. During her third year, at the university, she joined the Brown & Brown company as an intern. Following that, she worked as a student assistant in the office of Students Affairs at her University.

Early Career Away From Spotlight

After graduating from the University, she joined Brown & Brown as an account executive. She was associated with the company for 1 year and 2 months.

Leaving the company, she joined Perryman & Associates as a Sales Consultant. Also, after a month, she was hired as in the LightWork Software as a sales consultant.

Altogether, she featured the 8 episodes of the series in the season. They met in the previous

Besides that, her former earnings as an account executive is $53k.

The news of the breakup of Kristian and Demi has made quite a buzz in the media. They met through the previous Bachelor contestant Catherine Agro. Their relationship was a hot cake when they were dating each other.

Their photos also have been featured in US Magazine and Refinery29. Hence, the public had quite a lot of expectations from the couple. Hence, their separation left the clue that they were dating each other to the publicity only.

She is a blue-eyed blonde. Her height is 5 feet and 7 inches.