Mostly know him n for his portrayal of Hodor in the HBO fantasy series ‘Game of Thrones.’. 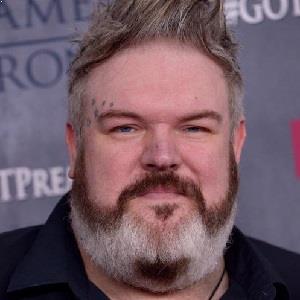 I've had dogs all my life. I'm a huge animal lover, especially dogs, so that's one of the hardest things about being away all the time. I really miss them, but my mum does a really good job looking after then when I'm gone.

I was always very into heavy metal, and heavy metal is full of emotion and extremes, and I think that's the same in dance music.

I trained to become a sign-language interpreter because it helps you read physical expression and the emotions of body language.

What is the relationship of Kristian Nairn?

Kristian Nairn publicly came out as gay in an interview with a ‘Game of Thrones’ fan site in March 2014. At present, he is believed to be single.

He does not have children from any of his relationships. There are no records of any relationship affairs that he has had in his career.

Who is Kristian Nairn?

Kristian Nairn is a Northern Irish actor and DJ. People mostly know him n for his portrayal of Hodor in the HBO fantasy series ‘Game of Thrones.’.

Furthermore, he has appeared in other movies and television series including ‘Four Warriors and ‘Ripper Street’.

Nairn was born in Lisburn on November 25, 1975. Most of the information relating to his early life and childhood is not available at present.

He is of Northern Irish nationality. Furthermore, he has not revealed his ethnic background as of now.

Talking about his education, there is no detailed information regarding his educational background of Nairn at present.

Nairn initially portrayed the role of Barnaby Silver in ‘Ripper Street’ from 2012 to 2013.

Additionally, he also voiced in the video game ‘World of Warcraft: Warlords of Draenor’. He has appeared in other different movies and television series and has more than 5 credits as an actor.

Nairn’s most iconic role came in 2011 after he appeared as Hodor in the HBO TV series Game of Thrones. Furthermore, he has also appeared in ‘Mythica: The Godslayer’ as Tek.

He is also a progressive house DJ and used to be the resident DJ of Kremlin, a gay club in Belfast.  He went on a tour called ‘Rave of Thrones’ in the US and Australia between 10 October and 13 December 2014.

Nairn garnered the MTV Movie + TV Award nomination in the category of Tearjerker in 2017 for his role as Hodor in ‘Game of Thrones.

Nairn has not revealed his current salary. However, he has an estimated net worth of around $ 500 thousand.

Nairn has successfully kept his life away from the mainstream media. To date, he has not been part of any notable controversies.

Additionally, currently, there are no rumors concerning Nairn’s life and career.

Talking about his body measurement, Nairn has a towering height of 6 feet 10½ inches (2.1 m).

Additionally, he weighs around 140kgs or 308 pounds. Furthermore, his hair color is gray and his eye color is light brown.