Known for numerous films and television roles like in 'Orphan Black' as Bonnie Johanssen, in 'Signed, Sealed. 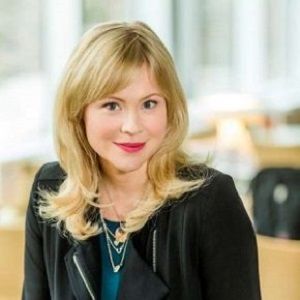 Kristin Booth is married to Time Ware who is an American composer and musician. They were found to be dating before and after dating for several years, they committed to the married relationship on 16th September 2006.

Although they have been married for a long there isn’t any information about their children. It seems like the couple living happily in Canada having no rumor on their external affairs and divorce.

Who is Kristin Booth?

Kristin Booth is a Gemini Award-winning Canadian actress who is mostly known for her nickname Kristi.

She is well known for numerous films and television roles like in ‘Orphan Black’ as Bonnie Johanssen, in ‘Signed, Sealed, Delivered’ as Shane McInerney, in ‘The Calling’ as Grace Batten, and in ‘Sex After Kids’ as Bethany.

Talking about her early life, Kristin was born on 28 August 1974. She experienced her childhood in Kitchener, Ontario, Canada, and grew up in a little hamlet called Kinkora, near the town of Stratford.

Details about her father, mother, and ethnicity are unknown.

As per her education, she attended Ryerson University where she graduated with Honours BFA from Ryerson Theatre in 1997. She also joined Rockway Mennonite Collegiate in Kitchener where she has earned a degree.

Kristin Booth had started acting while she was in primary school portraying as an orphan in a production of Annie.

Before she takes a step towards a career, her parent insisted on graduating from high school and college first. she joined Toronto’s Soulpepper Theatre Company in 2001 which produces classic plays.

Kristin Booth had already started her career when she was 12 years playing the role of an orphan in Annie’s production. Later on, she debuts in the television series ‘Exhibit A: Secrets of Forensic Science’ playing a role as Leslie Wilco on the episode of ‘Cheerleader Murder’.

Later on, she appeared in ‘Brimstone’, ‘Ice’, Traders, and Crime in Connecticut: The Story of Alex Kelly. After then, in 1999, she debuts in the movie ‘Detroit Rock City’ as a Cashier. She has started her journey in the industry in 1997 and she is still currently engaged in acting earning the name, fame, and fan followers.

Being involved in the acting career for so long she had definitely earned a luxurious lifestyle. Although it’s had to put up her annual salary in an accurate figure her net worth is estimated to be $5 million but her salary is unknown.

Moving towards her body measurements, Kristin Booth has a good height of 5 feet 5 inches (1.65m). She has blonde hair and her eye color is blue.

There is no information about her dress size and shoe size. Her weight is around 65 kg.