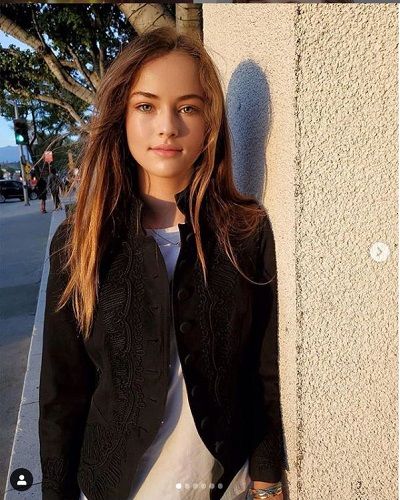 This is about a Russian child model- Kristina Pimenova. Her name was in the World’s most beautiful girl by Women Daily magazine at the age of nine. She has also stepped into acting.

This young social media star was born on December 27, 2005, which makes her 13 years old at present.

Her birth sign is Capricorn. She is born to parents Ruslan Pimenov (father) who is a former Russian football player and Glikeriya Shirokova (mother) who is also a former model. Kristina has a sister Natalia Pimenova. As she is young all her social media profiles are handled by her parents.

Describing her educational background, information is yet to be revealed on the web. We do not have much information about her school days and her graduation at present.

Since the beginning of her childhood, Kristina’s interest in modeling started. She also started this career at the early age of three.

Kristina has practiced rhythmic gymnastics in Moscow which was under Olga Kapranova. She also won a gold medal in her age group which was a gymnastics tournament in Tatarstan organized by Alina Kabaeva.

Her appearance can also be seen on the cover of Vogue Kids in April 2015. On the same year, Kristina and her mother moved to California where a documentary about Pimenova aired on RTL Television in October 2016.

She also played a post-production part as a singing child in the Italian fantasy film Creators: The Past which is dated to be released in 2019. Also made her appearance on The Russian Bride (Thriller/Horror) where she acted the role of Dasha.

With an interview for Posh Kids Magazine, she shared her wish to become a professional actress and film director.

Fans from all around the world and Personal Life

Kristina is the one of the child social media personality it is pretty of having obvious about millions of followers in her accounts. Therefore, her Instagram account @kristinapimenova has 2.4 million followers. You can also follow her in her Twitter fan’s account @KPfansofficial.

Talking about her personal life, she is too young to be in a relationship with someone. She is growing her professional life as a model and now also as an actress. We lack information about her net worth and salary.

A short bio on Kristina Pimenova:

Kristina Pimenova is a Russian child model. She has also appeared in a couple of movies such as The Russian Bride and Creators: The Past.

Furthermore, she has been also featuring in several popular brands such as ‘Roberto Cavalli’, ‘Benetton’, ‘Dolce and Gabbana’, ‘Armani’, and few others. In addition, she was also named the World’s most beautiful girl by Women Daily magazine at the age of nine. more bio…