Kristoffer Cusick is an American actor. People mostly know him for his appearance in musicals including ‘Saturday Night Fever’, ‘Rent ‘and ‘Wicked.’

Kristoffer Cusick is openly gay. He was previously in a relationship with British-American actor, Wentworth Miller. Currently, Cusick is a married man. He is married to a guy named Dan. They married in September 2018. 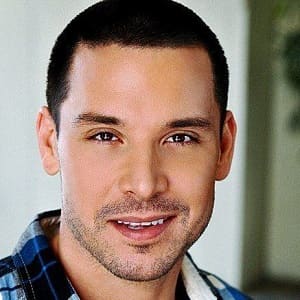 The producers of "Wicked" have been really supportive of me being out in my media interviews, in spite of having this matinée idol type of role. Some of the guys who have written to me through my website have asked how it is being out and an actor, and it's been fun to answer those questions and give people an inside scoop. Not a lot of actors are out. [Interview with John Olson, February 2014]

Who is Kristoffer Cusick?

Kristoffer Cusick is an American actor. People mostly know him for his appearance in musicals including ‘Saturday Night Fever’, ‘Rent ‘and ‘Wicked.’ Additionally, he has also appeared in TV series like ‘Vinyl’, ’Person of Interest’, and ‘The Good Wife.’

Cusick was born in Lakewood, California on March 29, 1974. His mother Linda was a recording artist on Capitol Records. He enjoyed acting, singing, dancing, and gymnastics as a child.

He was the California State’s Youth Talent Ambassador when he was just three years old. Kristoffer is of American nationality. Furthermore, there are no details available about his ethnic background at present.

Talking about his education, no information is available relating to Cusick’s educational background.

Cusick initially appeared in the original Broadway cast of the musical ‘Saturday Night Fever’ at the Minskoff Theater. In addition, he was also in the Off-Broadway cast of ‘Extraordinary Ordinary.’ He has been in the cast of several other projects including American Conservatory Theater’s Armistead Maupin’s ‘Tales of the City’ and ‘Hands on a Hardbody.’ Since then, he has also appeared in several other movies and television series. All in all, he has over 5 credits as an actor.

Some other movies and television series that Cusick has appeared in include ‘The Catalyst’, ‘Test’, ‘Ugly Betty’, ‘Pretty Cool’, ‘Broadway: The American Musical’, and ‘Macy’s Thanksgiving Day Parade’ among others. Furthermore, he also portrayed the role of a Guidance Counselor/Soldier as well as Lucas understudy in Broadway musical ‘If/Then.’

Cusick won the Festival Honor in the Zed Fest Film Festival for his performance in ‘The Catalyst.’ He received the award in the category of Outstanding Acting Performance. Additionally, he has also won the RIAA Platinum Record Award for ‘Wicked.’ Furthermore, at the 47th Grammy Awards, he received the Grammy Award for Best Musical Show Album.

Cusick has not revealed his current salary. Furthermore, there are no details available about his estimated net worth at present.

Cusick has not been involved in any notable controversies in his career. Furthermore, at present, there are no rumors concerning his life and career.

Talking about his body measurement, Cusick has a height of 5 feet 11 inches (1.8 m). Additionally, his hair color and eye color is dark brown.