Kristoffer Polaha is an American film and television actor and author.

Kristoffer Polaha is happily married to actress Julianne Morris. Together the couple is blessed with three sons.

On June 7, 2003, the couple exchanges their vows at the Windermere Chapel in Windermere, Florida. Afterward, the couple welcomed their first child named Kristoffer Caleb Polaha on Wednesday, July 28, 2004. After two years, the couple is blessed with a second child named Micah Polaha. Likewise, their third son named Jude Polaha was born on January 2, 2011. 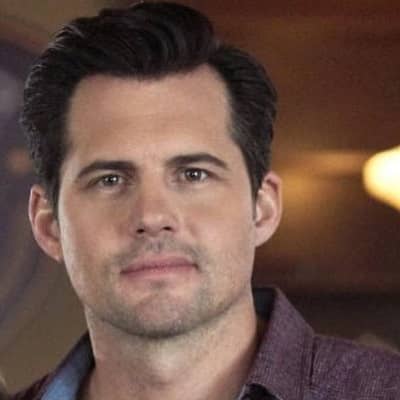 Who is Kristoffer Polaha?

Kristoffer Polaha is an American film and television actor and author by profession. He is best know for starring in the teen drama television series, Life Unexpected as Jason Matthews and as Henry Butler on CW’s crime drama series, Ringer.

Since 2016, he has been appearing in Hallmark movies and television series such as Hearts of Christmas, Dater’s Handbook, Pearl in Paradise, Mystery 101, and more.

Kristoffer was born to parents Jerome “Jerry” Michael Polaha (father) and Esther Polaha (mother) as Kristoffer Jon Polaha. The birthdate of the actor was on February 18, 1977, and his birthplace is in Reno, Nevada, USA.

Kristoffer’s father was a Washoe District Court Judge. He is the youngest child of his parents among four children. He has three brothers named Erik Polaha, Michael Polaha, and John Polaha.

In the early 1990s, he moved to California where he attended Robert Louis Stevenson boarding School in Pebble Beach. After that, he enrolled at the New York University Tish School of the Arts from where he graduates in 1991 and received a Bachelor’s degree in arts.

He holds an American nationality and belongs to mixed ethnicity of Czech, Irish, German, and French.

From an early age, Kristoffer was interested in acting. When he was in the first grade he played the role of Christopher Robin in the first-grade play. Likewise, he was Peter Pan in a sixth-grade play.

After graduation from NYU, he joined Stephen Kennedy Murphy’s Playwright Theater in NYC. He was cast as the Young Eugene O’Neill and act in theater production such as ‘Ragtime Revue’ at Lincoln Center, ‘The Long Days Journey Into Night’ at the Roundabout Theater, ‘Bread & Butter’ at Provincetown Playhouse.

In 2003, he got a major role of John F. Kennedy Jr. in the 20th Century Fox television film called America’s Prince: The John F. Kennedy Jr. Story. A year after, he was cast in the lead role of Jason Matthews on Fox’s soap opera, North Shore. Similarly, he made his big-screen debut in the year 2008 through the film Billy: The Early Years.

Besides, Kristoffer is an author who has co-authoring a series of romance novels alongside Anna Gomez. The first one entitled “Moments Like This” was released on February 2, 2021.

He is also involved in some philanthropic works such as ambassador of World Vision, a board member of HerrtInAction, and The Polaha Family Circus Foundation.

Kristoffer has won the Best Actor award from Seattle Shorts Film Festivals in the year 2016 for his film Frontman.

The actor has accumulated a decent amount of wealth through his successful acting career. As per sources, he has an estimated net worth of $6 million. His salary, yearly income, and other assets are still under review.

The actor has an athletic body posture with an impressive height. He stands at the height of 6 feet 3 inches tall and weighs about 88 kg. His chest, waist, and biceps sizes are 42, 33, and 14 inches.

Likewise, he has dark brown hair with a blue pair of eyes color.

On his Instagram handles, he hosts his weekly Polaha Chautauqua, where he picks a topic in which people discuss and share things with him. It’s kind of become part therapy, part Bible study, part inspiration.