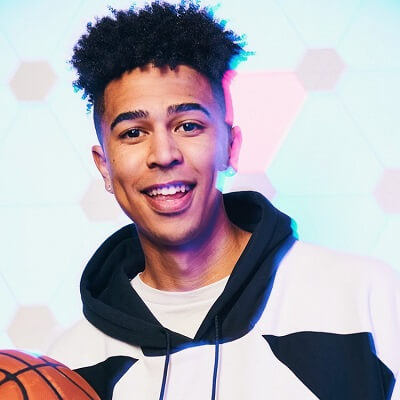 ''I always liked making videos. In high school, I started with animation—just stick figure animation—I loved drawing and creating videos and then I discovered YouTube. During my freshman year in college, I realized I could make a career out of it. But I didn’t start taking YouTube seriously until I dropped out of college in my junior year.'' ''I was writing every day, making content every day, uploading every day. I wanted to be known as more than just a basketball player. I didn’t even look at a basketball when I first stopped playing for a year or two, and I didn’t upload any basketball-related content. It was all comedy. I used to write skits and try to make people laugh.''

Kristopher London’s relationship status is in a relationship with his girlfriend Bri Martinez. She is from Portland, Oregon, and is a model and a social media personality.

Since their first date, the couple has been together for over two years now. Marking their first anniversary, he took it to his Instagram in December 2017 and shared a picture with Bri.

Who is Kristopher London?

London is well known for his comic content videos on his self entitled Youtube Channel Kristopher London with 2 million+ subscribers.

He also a member of the NBA focused web group 2Hype House which has 1.08 million subscribers on Youtube.

He belongs to Afro-American Ancestry.

After this, more comedic stuff like ‘TERIO DANCE IN PUBLIC’ and ‘THINGS I HATE’ followed. All these videos became huge hits in no time.

London then began uploading different stuff like his personal life stories, challenges, etc. Just like his previous videos, these videos too were appreciated by the audience.

The young YouTuber was motivated by the viewers’ feedback and he began uploading videos almost every day. He came up with more humorous stuff like ‘How The World Will End’ and ‘WHY I HATE THE DENTIST’ and also shared his personal stories like ‘What Do My Tattoos Say’, ‘THE SIBLING TEST’ and ‘GET TO KNOW ME’.

On his main channel his focus is basically comedy focused. These range from rants, reactions, vlogs, pranks, etc. On his gaming channel, LSK, he mainly plays NBA and he does an entertaining commentary. LSK also has 1.22 million subscribers.

London’s journey of uploading varied varieties of content continued and he became famous within a few years’ time. As of March 2020, his channel holds over 2.28 million subscribers and about 3 million+ views. His videos have thousands of likes and shares as well.  In addition, People will also find game-related videos on London’s channel.

His most recently uploaded videos are ‘Who’s the Best at FAKING IT in the 2Hype House?’, ‘The Hardest Video Game Quiz Ever!’, ‘ The Funniest 5- Second Rule Game is BACK! w/2Hype Game’, and ‘The Funniest Accent Challenge Ever – 2Hype House’.

How Much Does Kristopher London Earn?

London has also become a “Twitch Streamer,” which means he records himself playing video games. He makes money doing this.

The young youtube star is 6 feet and 10 inches tall and weighs 88 kg. He has dark brown eyes with dark brown and curly hair. He really has an athletic body.

You may also know about the net worth, body measurement, and the professional life of Kate Elizabeth(Youtuber), Cherry Wallis, and Hannah DeForce.