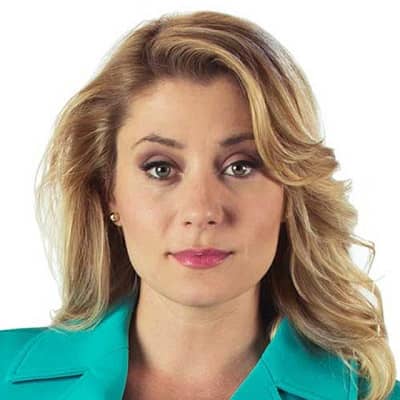 Krystin Pellerin is currently married. She exchanged vows with Rylan Wilkie on 05 Jan 2019. Her husband is also an actor.

Other details regarding their affair and wedding are unknown.

Who is Krystin Pellerin?

Krystin Pellerin is a Canadian actress. She is popular for her role as Sgt. Leslie Bennett in the show Republic of Doyle.

For her performance, she was nominated for a Gemini Award.

She was born as Krystin Elizabeth Josephine Pellerin on 12 July 1983 in St. John’s, Newfoundland, Canada. The identity of her father is unknown but her mother’s name is also not disclosed.

Krystin belongs of Caucasian descent. Regarding academics, she attended Prince of Wales Collegiate and the National Theatre School of Canada. Then she enrolled at the Memorial University of Newfoundland.

Krystin Pellerin has done TV, movies, and theatre. After her study, she joined Soulpepper Theatre. There she plays the character of a rebellious daughter in The Real Thing for every season.

She debuted on the big screen with a movie of 2006 titled Warriors of Terra as Izzy. Then in 2007, she played the role of Ellen in a comedy thriller Killing Zelda Sparks.

Krystin is known for appearing in a comedy-drama series named Republic of Doyle. In it, she played the character of Leslie Bennett from 2010 till 2014. A short film Touch also made her popular. It was directed by Noel Harris and won 21 awards worldwide.

She has an estimated net worth of $500k as of the year 2021. The earnings from her acting career are not yet revealed.

This Republic of Doyle’s star is at present keeping herself away from rumors or any desperate scandals.

Regarding Krystin Pellerin’s body features, her height is 5 ft 3 inches and her body weight is average size. Moreover, the color of her eyes is hazel and her hair is light brown.

This star is not available on a social site like Facebook. But she started to use Instagram and her account has over 2.8k followers. She posted a picture of a Christmas tree on 11 Dec 2020 and it is loved by the viewers.