Kurt Sutter is a married man. He is married to actress Katey Sagal.

The pair married on 2 October 2004. Their wedding took place in a private ceremony at their home in Los Feliz, California.

They have a daughter together, Esme Louise Sutter who was born on January 10, 2007. Esme was born via surrogate.

The couple’s marriage is going strong as there is no news regarding any extramarital affairs at present. 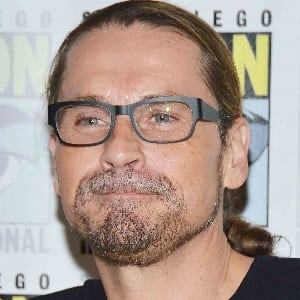 [on Sons of Anarchy (2008)] I'd like to think that, when we're pushing the envelope, it's never gratuitous. Ultimately, the world this story takes place in, the subculture, is really background for what I like to think of as a family drama. It's a love story between a man and his wife. To make characters like the 'Sons' palatable for an audience, you have to stress those elements of brotherhood and family and love.

I met a group of guys from that world at a rally about a month and a half ago, and they said an interesting thing: that this show has ultimately become a good PR vehicle for outlaw clubs, from acceptance from the general public all the way to law enforcement. I don't know if that's a good thing or a bad thing. But I was glad.

Who is Kurt Sutter?

Kurt Sutter is an American screenwriter, director, producer, and actor.

People mostly know him for his works in movies and television series like ‘The Shield’, ‘Sons of Anarchy’, and ‘Southpaw’ among others.

Sutter was born Kurt Leon Sutter in Rahway, New Jersey on May 5, 1960.

His mother was a secretary for the Roman Catholic Archdiocese of Newark and his father worked at the General Motors plant in Linden.

Additionally, he has two older sisters and throughout his childhood years, he grew up in the township of Clark, New Jersey.

He became interested in the world of show business from an early age.

He is of American nationality. Furthermore, he belongs to a mixed ethnic background of Austrian, Swiss-German, German, and Danish.

Talking about his education, Sutter attended Roselle Catholic High School and graduated in 1978. In addition, he attended Livingston College at Rutgers University.

Eventually, he graduated with a BA in mass media with a minor in English from Rutgers University in 1986.

Sutter initially moved to Los Angeles, California in 2000. In 2002, he became a staff writer for the first season of FX crime drama ‘The Shield.’

For the show, he has worked as a writer for 17 episodes.

Kurt was the creator of the TV series ‘Sons of Anarchy.’

He has been the creator of the show for 92 episodes.

Since then, he has worked in several other movies and television series.

Some other movies and television series that Sutter has worked in are ‘Diva.

Additionally, Kurt has also appeared in several TV series like ‘The Bastard Executioner’ and ‘Grandsons of Anarchy.’ Furthermore, he has 2 credits as a director and 9 credits as a producer.

Sutter has garnered three Primetime Emmy Awards. In addition, he won the ASCAP Award in 2013 for his work in ‘Sons of Anarchy.’

Sutter has not revealed his current salary.

However, he has an estimated net worth of around $30 million at present.

Sutter became part of a controversy in 2011 after he criticized AMC.

Additionally, he blamed Mad Men’s Matthew Weiner for Frank Darabont getting fired as showrunner on ‘The Walking Dead.’

In addition, he also quit Twitter after his rants. At present, there are no rumors concerning Sutter and his career.

Additionally, his hair color is dark brown/blonde and his eye color is blue.

Sutter is active on social media.

Similarly, his Facebook page has more than 580k followers.