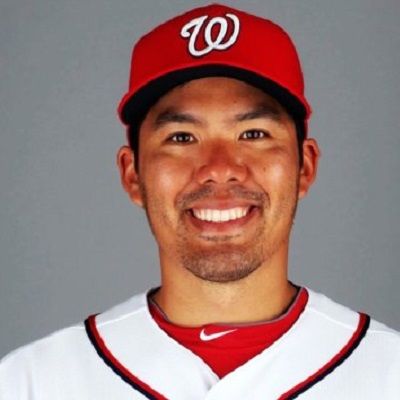 Kurt Suzuki is a happily married man. He married Renee Marie Suzuki.  The couple met when they were at the California State University. She was a fellow Titan who played volleyball and represented the women’s team.

They got married in January 2007 and have been together since then. Kurt and Renne are the parents of three children. Their first daughter Malia Grace Suzuki was born on 28th April 2011. Likewise, their son Kai Noah was born on 4th November 2013 and Elijah was born on 12th July 2016.

Who is Kurt Suzuki?

Similarly, he was draft in the 2004 Major League Baseball.

Kurt was born on 4th October 1983 in Wailuku, Hawaii. He was born to father Warren Suzuki and mother Kathleen Suzuki. He belongs to American nationality whereas his parents are of Japanese descent.

In the year 2001, Kurt graduated from the Henry Perrine Baldwin High School. Similarly, he was mentored as a youth by Hawaiian MLB scout Walter Isamu Komatsubara.

The college career of Kurt

Kurt was drafted in the second round of the 2004 Major League Baseball draft. He was assigned to the Single-A Short Season Vancouver Canadians. Similarly, he batted .297 and committed just one error in 46 games.

On 9th June 2007, he joined the major league club. He made his debut three days later as a pinch hitter in a game against the Houston Astros. Also, his career’s first grand slam was on 10th September 2007 in the second inning against the Seattle Mariners. Likewise, on 23rd July 2010, he signed a four-year extension with Oakland Athletics of $16.25 million.

After being traded he returned to Oakland on 22nd August 2013.

On 3rd August 2012, he was traded to the Washington Nationals. He platooned with Wilson Ramos during the 2013 season. Similarly, on 12th May 2013, he was ejected for the first time in his MLB career by umpire John Tumpane for arguing a strike three call.

On 23rd December, he signed with the Minnesota Twins. Similarly, he was named to the 2014 Major League Baseball All-Star Game finishing up the game with Glen Perkins. On 31st July 2014, he agreed on a two-year contract extension. He hit a career-high .288 with 3 home runs and 61 RBI’s.

On 20th January 2017, he signed a one year contract with Atlanta Braves for $1.5 million. Likewise, he set a career-high in home runs that season. As he hit 19 in 276 at-bats while platooning with Tyler Flowers. Again on 23rd September 2017, they agreed on a one-year extension worth $3,5 million.

The former Titan catcher Jon Wilhite was helped by Kurt and his wife. As Jon was severely injured in a car crash.

While Kurt was in college he won the Jonny Bench Award as the country’s top collegiate catcher. He also won the first-ever Brooks Wallace Award.

The famous baseball catcher has an estimated net worth of around $25 million. He accumulates his net worth through his professional playing career. Similarly, his entire career earning is estimated to be $37,042,158.

He receives around $4 million annual salaries. Also, he signed a two years contract with Washington Nationals which was of $10 million guaranteed amount and an average salary of $5 million. Likewise, Kurt is recognized as the 13th best-paid player of Washington Nationals.

Kurt’s neck injury during the match

In June 2019, Kurt played the match against the Arizona Diamondbacks. He was forced to leave the match due to injury. When Tanner Rainey strike-three ball on Jarrod Dyson, the ball bounced in the dirt. It then hit Kurt in the neck area. After that, he threw the ball which hit the back of Dyson.

After being hit by the ball on neck he was examined by the head athletic trainer Paul Lessard. He had to leave the game due to the pain.

Kurt is 5 feet 9 inches tall with a weight of around 95 kg. Similarly, he has black color hair and brown color eyes.

The baseball catcher is not much active on social media. His social media presence is only on Twitter where his account is private and he has around 27.3k followers.