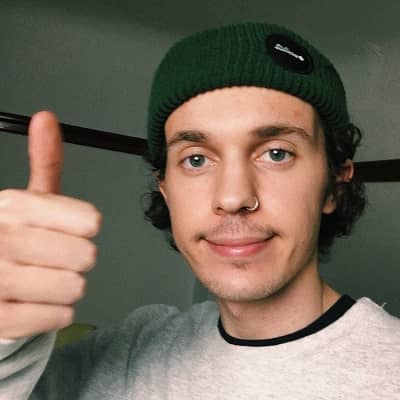 Kurtis Conner is in a romantic relationship with Jenna Allard. Jenna is a fellow Instagram celebrity. This love bird has been dating since 2014. They seem to be very sweet and adorable together.

Who is Kurtis Conner?

Kurtis Conner is you tuber, stand-up comedian, Internet sensation, and former Vine star. Initially, he gained fame on ‘Vine’ before becoming a star on ‘YouTube’. Moreover, he is well-known in the media personality.

In addition, he is a director and actor, popular for ‘The No Sleep Podcast,’ ‘Hot Jokes: A Comedy Special; and Bestie Picks Bae.’

Kurtis Conner is born Kurtis Matthew Kenneth Conner. He was born on the year of 1994, May 4 in Hamilton, Ontario, Canada. His horoscope sign is Taurus.

The 27-year-old musician, Kurtis’s mother’s name is Kelly Raise and his father’s name is Lawrence Watson. He was raised up with his niece named Kylie.

While talking about education, he attended Humber College and studied the Comedy; Writing and Performance’ program in Canada, Toronto. During his college days, he started performing comedy and making Youtube videos.

Primarily, he started his stand-up comedy career in 2013 and continued for 3 years. Then, he moved onto Vine and gained popularity. Likewise, he performed several stand-up shows all over Canada. He released his debut comedy album “Cuppla Jokes” in the year of 2016.

Aside from that, he starred at YouTube, where he began posting videos in 2014; however, the channel rose to stardom in 2017. He has content regarding the critique of problematic content on the YouTube platform for making fun of others. Similarly, he began uploading videos such as ‘Answering Questions, Being a vegetarian, My Tattoos, I met the real Santa.

Moreover, he has posted videos like The Internet’s Cringiest Dating Show Part 2’ and ‘The Most Attractive Man on YouTube. Further, he has also made content about TikTok Hype House which was used by Justin Bieber’s team to promote his song “Yummy”.

Besides that, he has also performed in a comedy bar at ‘ONEXONE Toronto International Film Festival in Canada.

Canadian Kurtis Conner holds a net worth of $1.3 million. As you tuber and comedian, he earned this fortune from his YouTube channel.

As a commentary, You Tuber with over 3.22 million subscribers, uploaded a video criticizing a problematic trend on the platform. He spoke about a “female Viagra prank” in the video.

Aside from that, he tweeted on Twitter that one of his older videos where he called out a dangerous prank had been removed for not reaching the bar to stay on the platform.

However, he explained the gist of the video with Insider. Conner said that he saw a certain couple on Instagram who made the videos about the guy giving his girlfriend this ‘female Viagra’. He said it is more harmful and ridiculous where a man effectively drugging his girlfriend without her consent. He said that even the videos were fake; it is still a harmful thing to be putting it online.

Moreover, he clarifies by saying that there are other harmful pranks that are shown on the platform and are still up on YouTube, which makes no sense. He is not against YouTube in fact he is on the side of YouTube and just clarifies critique should not be removed and have to encourage.

He is a tall man having a height of 5 feet 10 inches and his body weight is around 67 Kg.

Likewise, His hair color is blonde and his eye color is hazel blue. He pierced his nose and wear the pin.