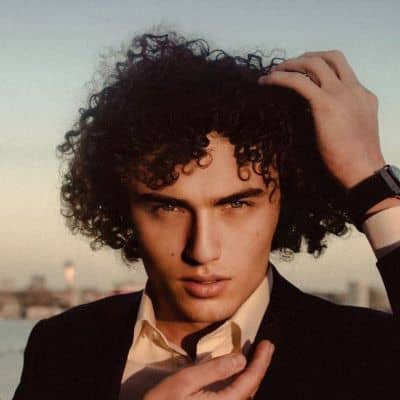 Presently, the renowned YouTuber Kwebbelkop is in a relationship with Sophie Duijn. Bussche announced his relationship status via Instagram in April 2021.

Previously, he was dating Victoria on 19 December 2020. He uploaded a video of GTA5 where it wins, Victoria would become his girlfriend. Before that, the YouTuber was in a relationship with Azzy in 2016. They remained together for four years.

Azzy is a named YouTuber and is better known as Azzyland and is a gamer. The couple separated in 2020. And Earlier, Kwebbelkop was in a love affair with Jamie. They both featured in Kwebbelkop’s earlier videos. Sadly, they also could not lift their relation ending up with separation in 2016.

Jordi Van Den Bussche, popularly known as Kwebbelkop is a well-recognized Dutch YouTube star, gamer, and social media personality. Bussche is widely famed for his self-titled YouTube channel that has more than 14.6 million subscribers at the moment.

Moreover, he posts gaming content on his YouTube channel which includes Happy Wheels, Minecraft, Assassin’s Creed, The Legend of Zelda Skyrim, and so on.

Kwebbelkop was born on 1 June 1995. At present, his age is 26 years old. Likewise, his birthplace is Amsterdam, Netherlands.

Nick is the son of his father, Ben van den Bussche whereas his mother is Brigittela. Moreover. she has a sister named Lauren.

Talking about his nationality, Bussche holds a Dutch identity whereas his ethnicity is Dutch.

Regarding education, the YouTuber finished high school and then dropped out of his further studies. He did not study further to pursue his YouTube career.

Kwebbelkop’s parents split up when he was too young. As a result, he spent most of his childhood with his sister and mother. Jordi considers his sister as the pillar of strength and is extremely closed to her.

His mother had married again but their relationship did not work as Bussche’s step-dad would keep drinking and fighting. Both his stepdad and his mom were abusive and drunkards. Kwebbelkop was never on anyone’s side.

However, their parents again separated as Brigittela found him cheating on her. Kwebbelkop and his sister faced heavy abuse from their stepdad. Having said this, he did not stop his career and work even harder.

Professionally, Kwebbelkop is a named YouTube star as well as a social media personality. He started his YouTube journey in 2008. However, the star began posting his gameplay videos of Call of Duty in 2011.

Similarly, in 2012, Bussche again started posting videos on daily basis. Some of his videos were highly loved by fans and went virals.

From then, his channel got recognition as a game channel of Minecraft and the Call of Duty: Black Ops 2 series. In February 2017, Kwebbelkop uploaded a video titled, RIP DAD stating his father passed away. Moreover, Bussche’s channel starred videos of games like Happy Wheels, Minecraft, Assassin’s Creed, The Legend of Zelda Skyrim, and so on.

He released his Grand Theft Auto V in September 2013 and focused on providing GTA5 content only for more than a year. Following his success and high views on different game videos, he along with his friend formed a YouTube channel named Robus. They played GTA Online races together.

However, his fellow YouTuber was replaced with British YouTuber Slogo and his brother, Swagglicious. Kwebbelkop has also made a game title, Impossible Runner that was published on 13 February 2017 for Steam, iOS, and Android.

A reputed Dutch YouTube personality, Kwebbelkop has earned a massive amount of money from his social media career and lives a lavish lifestyle.

It is reported that Kwebbelkop has an estimated net worth of $18 million. He has also earned from advertisements, promotions, and brand endorsement by different brands.

His YouTube channel growth earns him a revenue of around $22,500 per day which makes $8.2 million massive earnings a year.

26 years old star, Kwebbelkop has dashing looks, a tall and athletic body, and an admirable personality. He stands at a height of 5 feet 9 inches. Also, he has a balanced body weight of 66 kg.

Furthermore, Bussche has hazel eyes whereas he has long neck-length brown curly hair.

Regarding his social media presence, Kwebbelkop is an active personality on social media. Jordi has more than 1.1 million followers on his official Instagram account @kwebbelkop.

He is also active on Twitter with around 400k followers. He owns a YouTube channel named Kwebbelkop and it has more than 14.6 million subscribers at the moment.