NBA star Kyle is having an affair with his high school sweetheart, Crystal.

Kyle Anderson is in a relationship. He has been dating Crystal Marie Oquendo since high school.

Crystal is 27 yrs old and has worked as a dentist and a hostess so far. These lovebirds are happy to have found each other.

They are blessed with a son named Kameron. 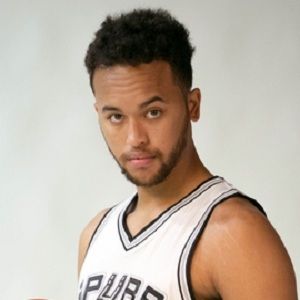 Who is Kyle Anderson?

Kyle Anderson is a professional basketball player from New York City. He plays for the San Antonio Spurs. His position in the court is a small forward/shooting guard.

At college, he played for the UCLA Bruins and won the team conference tournaments. He was named the most outstanding player at the Pac-12 conference.

Kyle F. Anderson was born on September 20, 1993, in New York City, New York. His father Kyle Anderson Sr. is a basketball coach and a source of his inspiration.

He is the youngest child of Anderson Sr. and Suzanne. He has two older brothers Duane and Jamar, and two older sisters Tai and Brittany. From early childhood his dad Anderson Sr. encouraged him to play basketball.

Kyle attended the Paterson Catholic High School. He played as a wing or in the post position while at Paterson High. After two years the school closed so Anderson joined the St. Anthony High School.

The team of St. Anthony with Anderson as its secret armor won two consecutive championships. After high school, Anderson attended UCLA to play for the UCLA Bruins. His basketball skills further improved while with the Bruins and his fame was unstoppable.

He was the lead scorer with 14 points. He was mainly positioned as wings or small forward throughout all the tournaments with St. Anthony.

While at college he played for the UCLA Bruins. He was often compared to the present days Magic Johnson and Larry Bird.

With the Bruins, Kyle played as the point guard which suited him so well that he was ranked 4 nationwide. With Anderson, the Bruins won the 2014 Pac-12 Tournament after six years.

Kyle Anderson joined the San Antonio Spurs in 2014.  He was positioned as a wing and power forward (occasionally) in the initial games for Spurs. Anderson played for the NBA Summer League with the Spurs in 2015 and 2016.

He was positioned as a power forward in 2018. So far in his career with the Spurs Kyle scores, 4.9 points, 5 blocks, 9 steals, 1.75 assists, and 3.6 rebounds on average per game. He has not won an NBA Championship so far.

Spur fans are questioning whether Kyle is a fit for the team because his highly-stated performance went all low while with this NBA team. Are they gonna get solid results or not is yet to be known.

Kyle Anderson is 6 feet 9 inches tall. He weighs 104 kilos. His hair color is black and he has brown eyes. Other details on his body measurements are unknown.