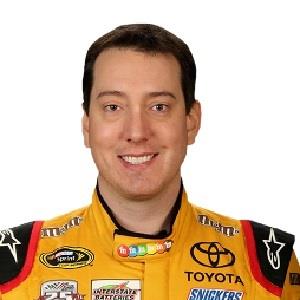 I can't see what I'm doing from inside the race car while I'm outside it, so I guess I'll have to have a sit-down (with Stewart) and figure out what went wrong. I want to clear the air because I don't want to get dumped at Atlanta. Atlanta will hurt.

I know Jimmie is a chase driver, but it doesn't much matter to me, I'm trying to race as hard as I can to win.

Kyle Busch is a married man since 2010. He began dating Samantha Sarcinella a few years ago their marriage. After dating each other for a few years, they got married on December 31, 2010.

Their marriage ceremony was held in Chicago and was featured in an hour special on Style Network. They together have a son, Brexton Locke Busch, born on May 18, 2015.

They are living a happy life and there is no sign of divorce at all. There are no other records of his past and present relationships and it seems like Samantha is the first love of his life.

Who is Kyle Busch?

He owns Kyle Busch Motorsports. Kyle is recognized as the champion of the 2009 NASCAR Nationwide Series and 2015 NASCAR Sprint Cup Series winner.

He is the younger brother of 2004 NASCAR Nextel Cup Series winner Kurt Busch.

Kyle Busch was born as Kyle Thomas Busch on May 2, 1985, in Las Vegas, Nevada, United States. Busch is an American by nationality and is of North American ethnicity.

He is the second child of American parents, Gaye Busch and Tom Busch. Similarly, Kyle has an elder brother named Kurt Busch who is also a car racer.

He started driving lessons at the age of six. Kyle’s parents owned a garage in which he worked as a child with his brother and father. As he grew up, he became the crew chief for his brother’s dwarf car team at age ten.

His mother wanted him to become a dentist but he wanted to become a car racer since his childhood.

He graduated a year early with honors from Durango High School in 2002.

Kyle began his driving career in 1998, shortly after his 13th birthday. He won over 65 races in legends car racing 1999 through 2001 including two track championships at the Las Vegas Motor Speedway Bullring short-track.

After that, he moved to the Late Models competition and scored ten victories at the Bullring during the 2001 season. He began his NASCAR Craftsman Truck Series at the age of 16.

Likewise, he made his debut at Indianapolis Raceway Park, posting a 9th-place finish in his first race in the series. In 2002, he made his debut in the ARCA RE/MAX Series at Lowe’s Motor Speedway. He entered NASCAR in 2003, as a development driver for Hendrick Motorsports.

In 2005, he competed full-time in the Sprint Cup Series for Hendrick Motorsports. He won his first career Sprint Cup race at California Speedway in September 2005 and became the youngest player to win the title in the history of the series.

In 2007, Busch became the first Nextel Cup Series driver to win in the Car of Tomorrow. Since then, he played in several competitions and won several titles. In 2015, he returned to NASCAR.

Moreover, Kyle founded Kyle Busch Motorsports in 2009. He was the 2009 Nationwide Series Champion and 2008 Southern 500 winner. He has the record for most wins in a single season when he won 13 races in 2010.

There is no rumor of him having an extra-marital affair at the present time. He has not been in any controversy till now and he is respected by all for his works and achievements.

Kyle has a height of 6 feet 1 inches and weighs 64 kg. He has black hair color and brown eye color. Other information on his body measurement such as shoe size, chest size, etc. is unknown.