Kyle Guy is a Professional basketball player who currently plays as a Shooting guard.

Kyle Guy is a married man. He is married to his longterm girlfriend, Alexa Jenkins in July 2019. They wed in the beautiful location, Hawaii. The couple was dating since 8th grade.

And they got engaged on Feb. 18, 2018, when Kyle proposed during a break in the Cavaliers’ basketball schedule. 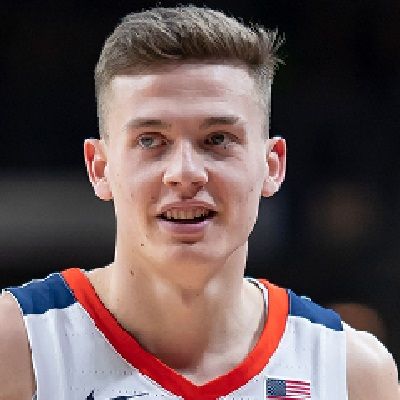 Who is Kyle Guy?

Kyle Guy is an American Professional basketball player who currently plays as a Shooting guard for the Sacramento Kings on National Basketball Association (NBA).

He was first drafted by New York Knicks in the 2019 NBA draft. Prior to that, he used to play college basketball and build his career in this field.

Kyle’s parents are Tim and Katya Fitzgerland(Stepfather and mother) and Joe and Amy Guy(father and stepmother). His father was also a footballer and played for the University of Cincinnati.

Besides it, his childhood happily passed with his five siblings: three brothers, Brady, Colin and Bennett, and two sisters, Tatum and Madison. Further, his great-grandfather was the commissioner for the Indian High School Athletic Association.

Talking about Kyle’s education, he attended Lawrence High School. Then he joined the University of Virginia and also played for their team, The Virginia Cavaliers men’s basketball. Moreover, he majored in American studies.

Currently, Kyle plays for Sacramento Kings of National Basketball Association. Additionally, he was first drafted by New York Knicks in the 2019 NBA draft and eventually was transferred to Sacramento Kings.

Prior to his professional career, he played college-level basketball, representing the team The Virginia Cavaliers men’s basketball. Moreover, he is expected to play along with the star players such as Marvin Bagley III, Bogdan Bogdanovic, Nemanja Bjelica and many more, representing team Sacramento Kings.

Talking about his achievements, he has won the Indiana Mr. Basketball award. From 2013 to 2016, he has earned four varsity letters at Lawrence Central High School.

The exact information about his net worth is unknown.

His salary ranges from$20,000 to tens of millions. Besides he was first drafted by the New York Knicks and signed in $6 million contracts for 4 years.

Moreover, he also earns some additional amount of money from endorsements and deals.

Kyle Sandilands and Tegan Kynaston is expecting their first child together! Psychic predicted ‘will have twins’