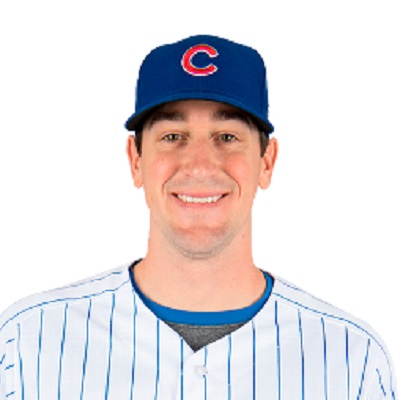 Kyle Hendricks is a married person. He proposed to his longtime girlfriend Emma Cain in 2015. His wife is also an athlete and a nursing graduate and they had been dating since 2012. The couple tied their knot on 18 November 2017. They have not welcomed any children to date.

Who is Kyle Hendricks?

Kyle Hendricks is an American baseball player who is a baseball pitcher for the Chicago Cubs of Major League Baseball (MLB).

He was born on December 7, 1989, in Newport Beach, California, USA. His birth name is Kyle Christian Hendricks. He was born to mother Ann Marie Hendricks, a medical-management consultant and father John Hendricks, is a golf pro. He has a younger sibling, sister Tori Hendricks.

Kyle holds American citizenship but his ethnicity is unknown.

He joined Capistrano Valley High School and then attended Dartmouth College. He received his bachelor’s degree in economics in December 2013.

He was drafted by the Los Angeles Angels in the 39th round of the 2008 MLB draft after completion of his high school. But, he did not sign up and chose to attend Dartmouth College.

At Collge, Kyle Hendricks has played college baseball for the Dartmouth Big Green. Hendricks was selected by the Texas Rangers in the 2011 MLB draft. With the Rangers, he played with Spokane Indians of the Class A-Short Season Northwest League and also played minor leagues with Tennessee Smokies, Iowa Cubs, etc.

Similarly, he made his Major League Baseball debut with the Chicago Cubs on July 10, 2014. With the team, from 2014 to 2019, he has played against Cincinnati Reds, St. Louis Cardinals, Cleveland Indians, San Diego Padres, Colorado Rockies, among others.

He must have accumulated a huge sum of money from his career however, his exact net worth has not been revealed yet. In March 2019 it was reported that Kyle Hendricks has signed $55.595 million over four years extension contract with the Chicago Cubs. It also holds a team option for 2024.

Kyle does not like to harm others and has not been involved in any rumors and controversies in his personal and professional life.

Kyle Hendricks has a height of 6 ft. 3  inches and weighs 86 kg. He has dark brown eyes and black hair. His shoe size, dress size, etc. are not available.