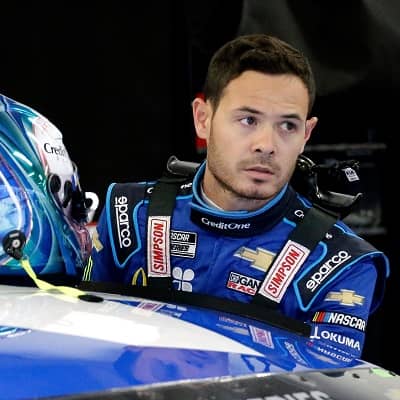 Those last 11, 12 laps were the longest laps of my life. I've been so close to winning so many times, but the fashion we did it in was extra special.

Kyle Larson is a married man. He exchanged his vows with his longtime girlfriend Katelyn Sweet on 26 September 2018. These two got engaged on 22 December 2017.

Katelyn is the sister of world-famous professional stock car driver Brad Sweet. This couple together has a son Owen Miyata Larson, born on 22 December 2014, and a daughter Audrey Layne Larson, born on 7 May 2018.

Who is Kyle Larson?

This athlete was born on 31 July 1992, in California, the US with the birth name Kyle Miyata Larson. His father’s name is Mike, and his mother’s name is Janet. He has a sister named Andrea.

Earlier, Kyle Larson attended racing with his parents a week after his birth. He started racing at the age of 7 in outlaw karts in Northern California.

He raced open-wheel cars including Silver Crown, USAC midget, and sprint cars. Kyle was the youngest driver to compete at Placerville Speedway. Larson is the second driver in history to win all three types of USAC cars in a single night in the 2011 4-Crown Nationals at Eldora Speedway.

He was awarded the series’ 2011 Rookie of the Year winning two Silver Crown races that season. The next year, he won six USAC National Midget races.

Afterward, in 2012, this driver was signed by Earnhardt Ganassi Racing (EGR) for the racing season. Kyle won the race and made his first start in a full-bodied stock car at the Pete Orr Memorial Orange Blossom 100.

He won his first K&N Pro Series East at Gresham Motorsports car. He made his ARCA Racing Series debut driving for Eddie Sharp racing at Michigan International Speedway on 15 June 2012.

Kyle won his first ARCA series in 2014 at Pocono Raceway. He moved full time to the NASCAR Nationwide Series in 2013 driving the No. 32 Chevrolet Camaro for Turner Scott Motorsports.

He is the first Asian-American and first D4D participant to win the 2013 NASCAR Nationwide Series Rookie of the Year. Larson moved full-time to the Cup Series in 2014.

The same year, in March, he won his first Nationwide Series at Auto Club Speedway. Afterward, he drives no. 51 car for Phoenix Racing at Charlotte Motor Speedway making his Sprint Cup Series debut.

Kyle set the track record with a speed of 183.438 mph at Pocono Raceway earning his first Cup Series pole in 2014. He also won on the Sprint Cup Series Rookie of the Year at the season finale at Homestead.

His other works on racing include the Kansas fall race, GEICO 500, the 2019 All-Star Race, Bluegreen Vacations 500, 2 Hours of Daytona. Later in 2020, he won the series record seventh consecutive race at All-Star Circuit of Champions.

Earlier, in 2017, he made a guest appearance as a limo driver in the movie Logan Lucky. Recently in 2020, Larson won 4 racing events like Indiana Midgetweek, Hoosier Hundred, Pennsylvania Speedweeks, and Chili Bowl Nationals.

Kyle has won 18 wins, and 14 poles, and was included 186 times in Top 10 in different racing series and events throughout his career.

Kyle made his Camping World Truck Series in June 2012 at Kentucky Speedway, finishing 10th in the event. The next year, he won his first Truck Series at Rockingham Speedway.

Afterward, he participated at Eldora Speedway in the inaugural Mudsummer Classic and finished the second position. Larson took part in a part-time basis for GMS Racing in 2016.

Recently, it was announced that he will be re-joining GMS Racing to drive the No. 24 truck for the Homestead race.

Kyle Larson: Salary and Net Worth

The salary of Kyle is under review. Meanwhile, according to Forbes, he has an estimated net worth of $10.1 million.

Larson was suspended by NASCAR after he was caught using racial slur in April while competing in an iRacing event. According to some sources, he is trying to return to the NASCAR Cup Series as soon as he can.

This athlete sparked controversy in 2019 on the NBC Sports segment Splash & Go! when he cracked a joke saying that Rick Hendrick starts “cheating and finding some speed” a couple of months into the start of a season.

Later, Kyle apologized to Hendrick for his comments.

Kyle Larson is 5 feet 6 inches tall and weighs 61 kg. Similarly, he has back hair and brown eyes.