Missouri-born Kyle Lowder was born as an American actor of “Days of Our Lives”. 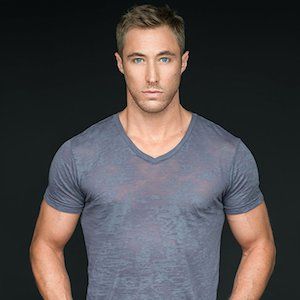 What is the relationship of Kyle Lowder?

Kyle’s muscular physique, blue eyes, and dashing look for sure have attracted a lot of female attention. But the one who got lucky catching his attention was his “Days of our Lives” co-star Arianne Zucker.

After they met on the set of “Days of our Lives”, they began dating each other for a couple of years. After around 2 years of dating, the lovebirds tied the knot on August 3, 2002.

The couple was pretty much happy with each other’s support and companionship until they announced their separation in August 2007. But the loving couples couldn’t stay away from each other and rekindled back in February 2008.

After more than a year of reunion, the couple announced that Arianne was pregnant in June 2009. They welcomed their daughter Isabella Lowder on December 7, 2009.

But sadly their12 yearlong marriage experienced some turmoil and couldn’t survive it the second time. The couple officially separated in March 2014.

Who is Kyle Lowder?

Kyle Lowder was born as an American actor popularly known for his role of Brady Black in the American daytime soap opera “Days of Our Lives”. He portrayed that role from August 2000 to September 2005.

The dashing actor also starred in the American television soap opera “The Bold and the Beautiful” which was created by William J. Bell and Lee Phillip Bell.

He played the role of Rick Forrester from January 2007 to January 2011. Besides acting, he also sings and is a talented classical singer.

Kyle was born on August 27, 1980, in St. Louis, Missouri. His birth name is Kyle Brandon Lowder. His nationality is American and his ethnicity is North American.

Kyle’s mother’s name is Susan Lowder and his father’s name is Craig Lowder. There is no information on his siblings. Kyle was athletic from a young age and was a quarterback player on his high school’s football team.

He joined Pleasantville High School Pleasantville, New York for his high school education. He graduated from there in 1998. After that, he enrolled at Syracuse University for his further education.

But his interest in acting made him drop out of college. He was keen on acting from an early age.

Kyle’s childhood was normal like other kids but he grew a deep interest in acting after his graduation which led him to drop out of college.

Kyle dropped out of college to pursue his acting career. Fortunately for him, Young and a good-looking actor got his first break in acting just within a year of dropping out.

He was cast as Brady Black on the American daytime soap opera “Days of Our Lives” from August 2000 to September 2005.

His amazing performance even earned him a nomination for the “Daytime Emmy Award-Outstanding Younger Actor in a Drama Series” in 2003. This boosted his acting career and led him to play another major role of Rick Forrester in “The Bold and the Beautiful”.

He portrayed this role from January 2007 to January 2011 until he decided to focus on his singing career.

Kyle is supposed to earn a handsome amount of salary backed up by his popularity.

His singing and acting career have helped to accumulate an estimated net worth of $ 17 million and his salary is unknown.

Kyle was surrounded by rumors regarding him to be the reason behind his 12 yearlong marriage failure. There were various speculations that stated Kyle not wanting to have another child was the main reason behind the divorce.

However, sources proved it wrong correcting the main reason behind the divorce was their different perception of their career.

Kyle’s height of 6 feet 1 inch tall and his weight is unknown.

He has golden brown hair color and blue eye color. His shoe size and dress size are unknown.

John Landis
Tags : Actor Days of Our Lives The Bold and the Beautiful