Kyle Lowry is an American professional basketball player. He tied the knot with Ayahna Cornish-Lowry after staying in a relationship for several years.

The basketball player, Kyle Lowry is a married man. He tied the knot with Ayahna Cornish-Lowry after staying in a relationship for several years.

As a loving couple, they have also welcomed two beautiful sons Karter Lowry and Kameron Lowry. Since their marriage, the married pair has maintained a perfect relationship with them. 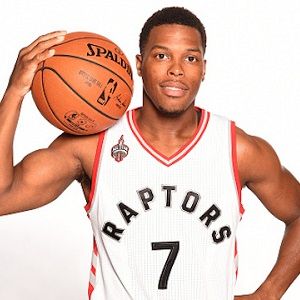 Bringing a championship to the city of Toronto and the country of Canada has been one the best things I've done so far in my career, and I'll push for that goal every single year I play this game.

It's cool to make the playoffs. It's not cool to lose in the first round anymore. The goal is to make the Finals.

We gotta play hard and leave it all out there. Dive for lose balls, take charges, just do whatever it takes to win the game.

Who is Kyle Lowry?

Kyle Lowry is an American professional basketball player. Currently, he plays for the Toronto Raptors of the National Basketball Association (NBA). Previously, he has played for Memphis Grizzlies and Houston Rockets. So far, he has received George Gross Sportsman of the Year award.

Kyle Lowry was born on March 25, 1986, in Philadelphia, Pennsylvania, United States. His nationality is American and ethnicity is Afro-American.

Details about his father and mother are not disclosed. From the beginning of his childhood, he had a keen interest in basketball and began to play from his school days.

Talking about his education, Kyle joined Cardinal Dougherty Cardinals high school in Philadelphia. During his school, he played point guard for his basketball team. Later, he enrolled at Villanova University and played basketball there.

Kyle began his career with Memphis Grizzlies in the 2006 NBA draft. On his debut match, he scored six points and had 10 rebounds, three assists, two steals, and a block on opening night against the New York Knicks. However, he couldn’t continue his spell at Grizzlies as he injured himself and shifted to Houston Rockets.

Besides this, Kyle scored a career-high 36 points on 13-of-16 shooting in a loss against the Philadelphia 76ers. On March 20, 2011, Kyle Lowry made his best record first triple-double with a 28-point, 10 assists, and career-high 11 rebound performance in a win against Utah Jazz. When he became ill after a bacterial infection, Kyle sent it to drafts.

On July 11, 2012, Kyle moved to Toronto Raptors. The legendary basketball player averaged career-best 17.9 points, 7.4 assists, and 4.7 rebounds during the regular season. At the end of the 2013-2014 season, he re-signed with the Raptors to a four-year, $48 million contract. In the 117-98 win against the Indiana Pacers, Kyle recorded his seventh career triple-double with 20 points, 11 rebounds, and 10 assists.

On November 28, 2016, he made a franchise record by hitting all six of his three-pointers for a game-high 24 points in a 122–95 win against the Philadelphia 76ers. Additionally, he recorded his first triple-double of the 2017-2018 season and his eighth as a Raptor with 11 points, 12 assists, and 10 rebounds in a 101–92 victory against the Los Angeles Lakers. As a national player, he has also won the gold medal at the 2016 Summer Olympics with U.S. Men’s National Team.

Being a successful and renowned player, Kyle earns a healthy amount of money from his profession. As of 2022, he has a net worth of $55 million. In 2021, his salary is $33.3 million per year.

As of now, there are not any drastic rumors regarding his personal and professional life. Moreover, he has never faced any controversy to date. It seems Kyle has total focus on his work rather than being stuck in any controversy.

Kyle Lowry has a strong physique with a towering height of 6 ft and weighs 93 kg. Moreover, he has black eyes and black hair.

Moving towards his other body measurements, he has 45 inches of the chest, 15.5 inches biceps, and 35 inches waist.