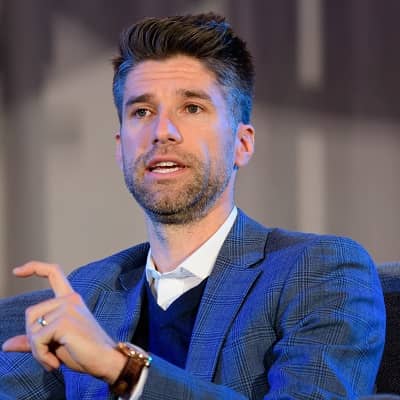 Kyle Martino is currently possibly single. He has not disclosed his relationship and affair.

Previously, he was married to an actress Eva Amurri on 29 October 2011.

He and his ex-wife together have a son Major born in 2016, and a daughter Marlowe born in 2014. They finalized the divorce in March 2020. Then their third child Mateo Antoni was born on 13 March 2020.

Who is Kyle Martino?

Kyle Martino is an American professional soccer midfielder, analyst, and host. He is best known as a former player of Columbus Crew and Los Angeles Galaxy.

This athlete was born on 19 February 1981, in Georgia, the US with the birth name Kyle Hunter Martino.

He studied at Staples High School, Connecticut where he was named Gatorade National Player of the Year in 1998. Afterward, Kyle graduated from the University of Virginia in 2001. He belongs to Italian descent.

Martino started playing soccer in high school. He also played for his University and scored 17 goals and provided 21 assists.

During the game at the University, he was named  ACC Player of the Year and was one of the finalists for the Hermann Trophy.

After his junior season in the UVA, Kyle signed a project-40 contract with MLS. He entered the 2002 Major League Soccer Superdraft where the Columbus Crew selected him. In 22 appearances, he scored 2 goals and 5 assists and won the MLS Rookie of the Year Award.

He guides Columbus to the longest unbeaten streak in MLS history in 2004. The next year, this player had a down year not scoring a goal.

Afterward, in 2006, he had a trial at Leeds United and NEC Nijmegen but did not earn a contract in both clubs. On 19 February 2008, he retired from soccer due to severe injuries.

At the year 2001 World Youth Championship, Kyle played for the United States. Later, on 12 October 2005, he scored his only international goal against Panama.

In addition to sports, he worked as a host on Travel Channel’s 36 Hours and NBC’s Spartan Race.

Kyle Martino: Salary and Net Worth

The average salary of this soccer player is $57,000. Meanwhile, according to some sources, he has an estimated net worth of $2 million.

This athlete got divorced from his wife ‘Eva’ recently. He was rumored to be dating someone and hiding an affair. He was also rumored to be active on a dating app ‘Raya’.

Meanwhile, he is doing great in his career.