Kyle Richards is an American actress and has featured in RHOBH. Kyle is married to Mauricio Umansky and has four kids. 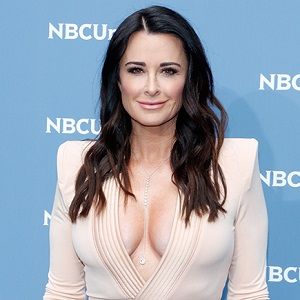 Kyle Richards is a married woman. She is married twice in her life.

Previously, she was married to Guraish Aldjufrie in 1988 when she was just 18 years old and pregnant with their daughter Farrah.

However, the couple couldn’t carry their relationship for too long and divorced in 1990.

Later on January 20, 1996, she tied the knot with her second husband Mauricio Umansky. In the same year, their first daughter Alexia was born on June 18, 1996.

Who is Kyle Richards?

Kyle Richards is an American actress and television star. Currently, she is playing as the main cast member in the hit TV series The Real Housewives of Beverly Hills since 2010.

Furthermore, she has also appeared as a contestant in The New Celebrity Apprentice. Her other films and TV series include Halloween, Down to Earth, City Guys, The Hungover Games, and much more.

Kyle was born on January 11, 1969, in Hollywood, Los Angeles, California, United States. She is the daughter of Kathleen Mary Richards and Kenneth Edwin Richards.

Talking about her nationality, she is American and her ethnicity is Irish, Welsh, plus English.

She has two siblings, Kim Richards, and Kathy Hilton. Moreover, Paris Hilton and Nicky Hilton Rothschild are her nieces.

From the beginning of her childhood, she had a keen interest in acting and she began to learn from a very early age. Concerning her education, there is not any information regarding her educational background.

Kyle Richards began her acting career in the 1974 movie Police Woman in which she played the role of Julie. In the next year, she began to appear in the TV series Little House on the Prairie and played until 1982. In 1977, she featured in several movies which include, The Car, The Father Knows Best Reunion, Eaten Alive, Father Knows Best: Home for Christmas and A Circle of Children.

Apart from that, Kyle has also taken part in several shows as a contestant in The New Celebrity Apprentice. Moreover, she has finished in 12th place and raised $25,000 for her charity. Currently, she is playing as the main cast member in the hit TV series The Real Housewives of Beverly Hills since 2010 along with her sister Kim Richards.

In addition, her other features also consist, Girlfriends’ Guide to Divorce, Whose Line Is It Anyway?, TMZ on TV, and a few more. Furthermore, Kyla and her husband Mauricio have donated $100,000 to the Children’s Hospital in Los Angeles.

Being a famous actress, she earns a huge amount of money from her profession. Currently, she has a net worth of $20 million.

So far, Kyle has won the 1991 Stinker Award in the category of Worst Performance by a Child in a Featured Role. Furthermore, she has also got various nominations for the Young Artist Award and Saturn Award.

Once, there was a rumor of Kyle that her husband, Mauricio Umansky had cheated and flirted with another woman.

However, she clarified that he had not done anything like that and she loves him as much as she did in the past. Furthermore, she has never faced any controversy in her career to date.

Kyle Richards has a height of 5 ft 2 inches and weighs 55 kg. Moreover, she has a pair of gorgeous hazel eyes and dark brown hair.

Besides this, her other body measurements include 36 inches bra, 27 inches waist, and 36 inches hip size.