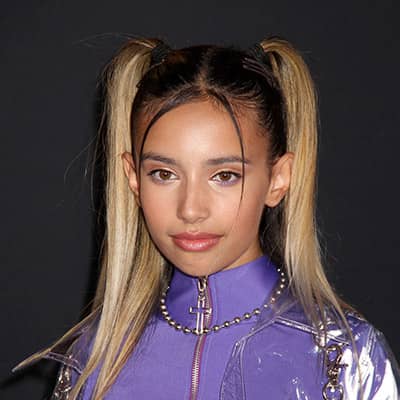 Kylie is currently assumed to be single. There are no past or present relationship rumors, gossip, or any kind of linkup of her yet. She wants to keep her personal life private and uptight. If any boy she will meet in the near future, hope she will open up and we have something to buzz about.

Who is Kylie Cantrall?

Kylie Cantrall is an American actress, singer, and TikTok star best known for her role in Disney’s Gabby Duran & the Unsittables. Along with this, she has done many films such as “The Toycracker: A Mini-Musical Spectacular“, “Bizaardvark” and Raven’s Home among the others.

Kylie Cantrall born Kylie Lorena Cantrall was born on June 25, 2005, in Los Angeles, California, the U.S. As of 2021, she will be celebrating her 16th birthday.

Her mother Carol Borjas is a dancer and her father, Alex Cantrall is a music producer. She followed the footstep of her parents from a very early age. Of course, she was supported by her parents as they were themselves a singer and dancer. She is the single child of her parents. Kylie often visits her friends and family who are in South America.

She is of American nationality and Venezuelan ethnicity. Furthermore, her birth sign is Cancer.

Before getting fame on the big screen, she started with the Youtube channel “Kylie Cantrall” on the 1st of May 2014. Kylie is popular for her angelic voice. In youtube, she posted several videos of cover songs of popular singers like Zendaya, Ariana Grande, Beyonce, and Selena Gomez.

On 13 January 2016, she released her first single ‘Sleep is for Suckas’, which has more than 824k views on Youtube. Inspired by it, she released more music videos including “Snake,” “Feature from Quavo,” and “Abraca DAH Brah”. Later, Kylie came into the limelight when she released a music video for “That’s What I’m Talkin’ Bout” with Disney Channel Voices.

Kylie has a huge profile on social media sites and her movie appearances provide her some amount. The rising actress Kylie has an estimated net worth of around $350K. Likewise, her annual earning is over $29 thousand. Till now, she hasn’t bagged awards and accolades. However, she is a rising actress and has a lot of years left to prove herself as a superstar.

Kylie has a height of 4 feet 11 inches tall and her weight is 42 kg. Likewise, her distinctive feature is her lean body and a pouty lips.

Moreover, she has blonde hair and her eyes are dark brown.