Posted on October 31, 2022 | Published By: Natalie | In Interesting Facts , Lifestyle , Shop
Share this 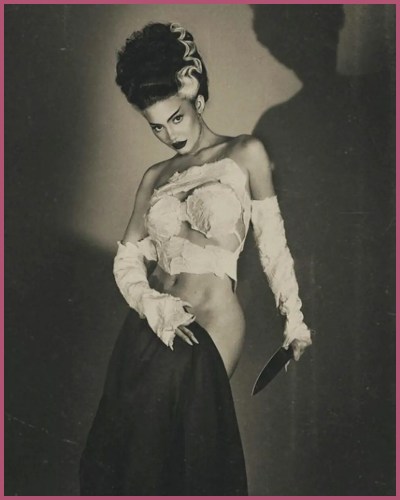 Kylie Jenner dressed up as Bride of Frankenstein for Halloween. source: Page Six

Kylie Jenner dressed up as a ghost for this Halloween

Kylie Jenner looked as if she was back from the dead this Halloween.

The Kylie Cosmetics founder who is very famous for all her Halloween costumes debuted her latest costume all dressed up as the Bride of Frankenstein posing on-point and looking terrific.

Kylie channeled the aesthetic of the original 1935 horror film Bride of Frankenstein in those stunning black-and-white pictures.

The mom-of-two who shared pictures of herself strapped to an operating table that looked like Dr. Frankenstein’s lab captioned the shot:

Another slideshow with the caption “🧟‍♀️🤍” showed three more snaps of an in-Kharacter Kylie, where her stitched dark scars appeared to be winding up her neck.

The 25-year-old completed the look with the mummy-style cloth wrapped around her body, opera gloves, and a prop knife.

One more attraction was her towering hive of hair done with a jagged white streak which is the signature of the lady friend to Frankenstein’s Monster.

Fans went gaga over the star’s amazing looks and flooded the comment section with praises.

Many Brides of Franken-stan expressed their love for the youngest Kardashian-Jenner sister’s hard work on this Halloween’s Eve.

Also, Read A Sneak Peek at the Postpartum Struggles of Kylie Jenner!

Family and friends flooded the comment  section with praises

The star also shared and tagged the team behind her great look, including her hairstylist Tokyo Stylez and her makeup artist Ariel Tejada. She also shares some unseen behind-the-scenes shots of the whole process.

Influencer Heather Sanders was also all praises for the style icon and wrote:

The Kylie Baby has always been a great enthusiast for Halloween in the past. She loves channeling her inner horror characters during the scariest of holidays.

Back in 2014, she dressed up as Bride of Chucky. On the 2018 Halloween, she turned into a cute storm which was a tribute to her baby daughter Stormi Webster.

And the following year, she received much attention for her immaculate embodiment of the late Hollywood icon Marilyn Monroe.