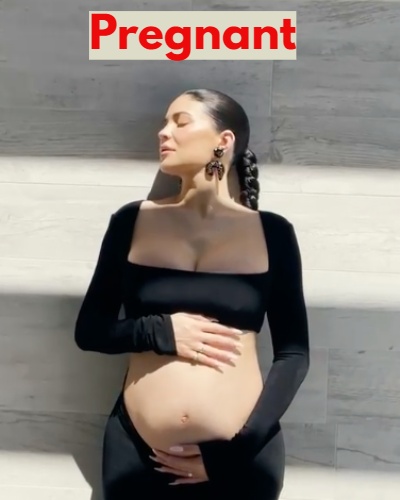 Kylie Jenner kept her promise with a pregnancy announcement of her second child with boyfriend Travis Scott! There has been an uncountable number of speculations made about her pregnancy since August 2021 but she confirmed it by an emotional video on Instagram showing her growing baby bump.

Jenner has made a pact that she would not be keeping her second pregnancy private like she did when she was pregnant with daughter Stormi in 2018. The makeup mogul has yet to reveal the gender of the baby. In the shared video, she shows a clip of her walking around the home with a positive pregnancy test in hand. We can see Travis wrapping his arms around Kylie as she stands before a mirror with her pregnancy test.

After that Kylie, Stormi and Travis are going for an appointment for her ultrasound. Kylie asks her daughter Stormi if she is ready to go for the doctor’s appointment with her mom. The doctor revealed that they are a couple of days away from hearing the child’s heartbeat. Likewise, the video moves to Stormi giving grandma Kris Jenner an envelope of ultra-sound pictures. We can see Kris being surprised by the pregnancy. Kylie said,

“We’re gonna have a baby! This is one of the happiest days of my life!”

Also read Kylie Jenner does not plan to keep her second pregnancy secret the entire time! Is she pregnant?

Jenner wore a white sports bra and sweatpants showing her baby bump outdoors. Later in the video, Kylie is seen in another ultrasound appointment with Stormi. They were amazed to see the coming baby. The model also did a maternity shoot at her Hidden Hills mansion wearing a striking black maxi dress with a dramatic cut across the midsection.

Stormi seems excited to become a big sister as she crashed the photoshoot and tenderly wrapped her arms around her mother’s midsection.

[Are we all not excited for the coming baby? At least I am!]

Also read Is Kylie Jenner married? ‘Stormi, I love you and wifey, I love you’ – Travis Scott!

The famous American reality Television star is a socialite, model, and fashion designer. Kylie Jenner gained stardom through her Kardashian family and appearing on the immensely popular show Keeping with the Kardashians. In 2015, Kylie also launched her own cosmetic line named Kylie Cosmetics which was a massive success. She is a social media star with millions and millions of followers. Read more bio…