Posted on November 9, 2022 | Published By: Gracie Hale | In Fashion
Share this 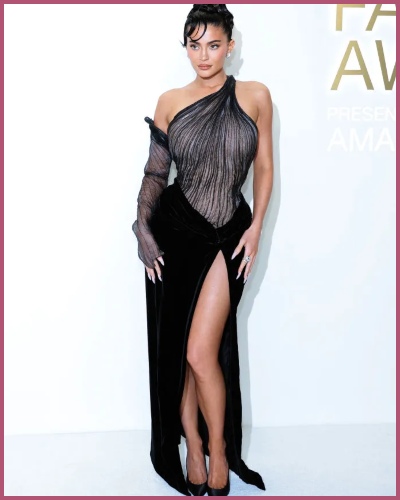 The 2022 CFDA Fashion Awards, which recognize excellence in American fashion design, were hosted on Monday night, November 7. The event was held at Cipriani South Street at Casa Cipriani in Manhattan.

The beauty entrepreneur accompanied her attire with a single glove in a matching fabric and texture. Kylie is accessorized with a pair of gemstone stud earrings and a high-jewelry Serpenti diamond ring in white gold with a pear-shaped aquamarine. Further, she styled the look simply, as she wore a pair of pointed-toe pumps.

Similarly, she went for makeup with an approachable evening look and her hair was done in a tight braided bun.

Kylie was accompanied by her mother Kris Jenner

Kylie was joined by her mother, Kris Jenner for the event. Kris wore matching outfits with her daughter coordinated in black together. The media personality, 67, sported a black Schiaparelli dress and gold earrings. Similarly, they posed together on the CFDA Awards’ white carpet.

The mother-daughter duo recently appeared on a project together with other sisters, Kim, Kendall, and Khloe for a holiday capsule collection for Judith Leiber.

Also read Here’s How Kyle Richards Reacted on Her Fashion Blunder at BravoCon!

Others are Stylist award honoree LawRoach; stylist Patti Wilson (the Media Award) and Kim Kardashian and Emma and Jens Grede (the Amazon Innovation Award.) The late designer Virgil Abloh was honored with the CFDA’s Board of Trustee’s Award.

Kylie Jenner gained stardom through her Kardashian family and appeared on the immensely popular show “Keeping up with the Kardashians”.