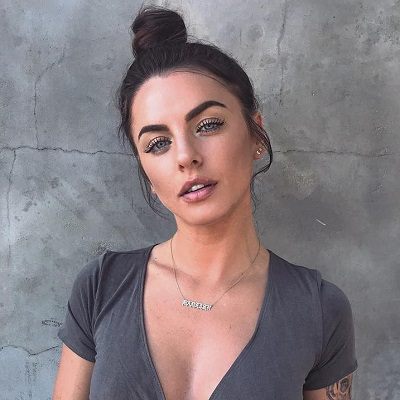 Previously, she was in a relationship with the YouTube star, Mark Dohner. The former couple started dating back in 2017. As a couple, they had made many videos for YouTube too.

Initially, they met with each other via Instagram DM in 2016. At the time, both of them wanted to collaborate with each other to make YouTube videos. After four to five months later, they started dating each other officially.

However, they broke up with each other after being in a relationship for around two years.

Who is Kylie Rae Hall?

American Kylie Rae Hall is a model and social media influencer. She is renowned for her fashion and make-up tutorials that went viral on the web.

Also, she is popular as an Instagram Star too.

Kylie Rae Hall was born on the 14th of July 1992 in Thousand Oaks, California. She is of mixed (British-Scottish-Irish-Germanic) ethnicity.

Till the date, she has not shared any details on her mother and father. However, she shared that she happens to be the youngest child to her parents.

At the time, she prefers to wear her brother’s clothes and shoes. Also, she loved playing sports like volleyball, soccer, and snowboard.

Kylie Rae Hall started her career as a sales manager. However, she got an opportunity to be in a photoshoot. At the same time, she discovered that she loved facing the camera and posing to be clicked. Later, in 2013, she started sharing her picture on Instagram.

However, at the time, it was just for her own purpose. At the end of 2014, she earned massive fans and followers with more than 30k likes in a post on an average.

Moving forward, on the 13th of January 2016, she started her own YouTube channel. She has a YouTube channel with over 559k subscribers and over 35 million views.

Through YouTube, she shares vlogs, makeups tutorials, challenges, and travel videos that earned massive followers on the channel too.

Apart from being a social media star, she is also a successful model too. She started modeling in her early teens. As a model, walked in ramp for Miami Swims Week. Also, she is currently working with brands like Fashion Nova, Tarte Cosmetics, PrettyLittleThings, and many more.

Apart from that, her Instagram posts are a major source of her income. As an Instagram star, her earnings are in the range of 5 digits figures. Also, he makes through brand promotions too.

As of now, she has managed to keep be far from any sort of controversy and scandals that created a buzz in the media. Similarly, there are no rumors linked with her.

Kylie Rae Hall has blue eyes with black hair. She stands at a height of 5 feet 3 inches and weighs around 54 kg. Her body measurements are 34-26-35 inches.

She loves tattoos and got first at the age of 16. Also, she has a huge skull tattoo on her left arm.

You may also read the bio of Rachel Bush, Cynthia Parker, and Kairi Cosentino.